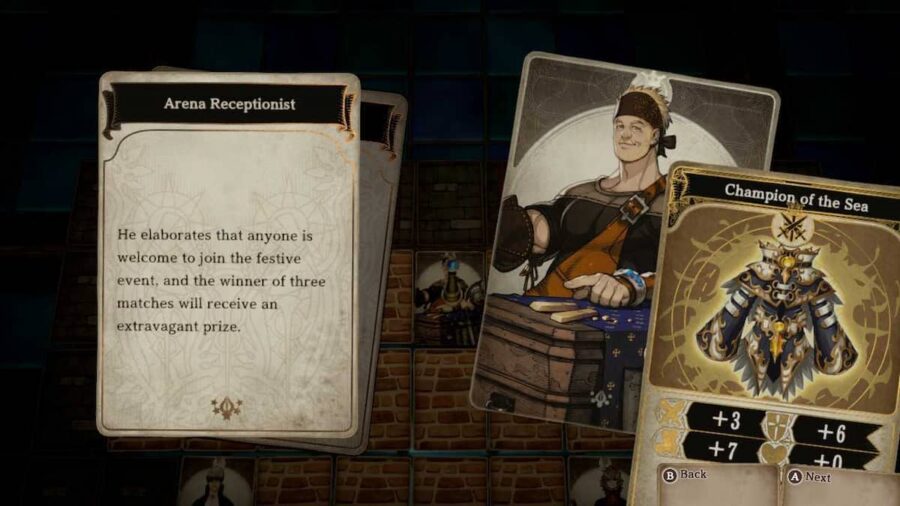 After you’ve cleared the Crimson Maiden’s story, you’ll come across a young man hurrying towards the Heroes’ Dominion. If you go back to the Arena, you’ll find that they’re hosting an open tournament with Champion of the Sea as its prize. It’s the earliest Legendary Armor you can get in the game.

To win it, you’ll have to defeat three combatants: a scary woman, a scarier old man, and the very scary arena receptionist that manages the tournament.

Before anything, just remember one thing: only attempt the open tournament after you have the four maiden weapons. This will allow you to grind your team to roughly level 20, which should be enough to win you the competition.

Related: Where is the shipwreck surrounded by cliffs in Voice of Cards: The Forsaken Maiden

The woman is alone, so she’s easy to beat. The old man has two mobs with him but he mostly fights defensively. Your real problem is the arena receptionist—a beast with 300 HP and 34 Attack.

How to beat the arena receptionist

After that, it’s just a matter of keeping your protagonist alive and making him attack the receptionist every turn. Lac and Laty will provide support. Laty will be your primary healer and buffer, while Lac will be your secondary healer (with Groom and Quality Omnisalves) and debuffer. Preparation is key to winning any fight.

How to win the open tournament in Voice of Cards: The Forsaken Maiden