Our Warframe: How-to Get Platinum Guide will walk you through all the different ways you can obtain this important in-game currency! We've got a list of multiple different ways you'll be able to earn these including, selling prime parts & corrupted mods, using syndicate points, and much more.

The free-to-play model is often not the most beloved monetization scheme for a game out there, but Warframe is an exception to this general rule. Sporting one of the industry’s most gamer-friendly systems out there, you never actually need to spend a dime to play Warframe but you are actually going to have to PLAY Warframe to do that.

In this article we’ll give you some insights into ways you can get platinum in Warframe, the in-game currency. You can do this through a variety of methods but none of them are very fast because they are legitimate. This article is not going to describe a “get rich quick” scheme for Warframe but rather a guide on how to use Warframe’s system to your benefit to earn platinum. Here are eleven ways to earn platinum in Warframe:

This is a tedious and slow way to earn platinum but it works. If you’re looking for a tried and true method that doesn’t take much more effort than playing the game, this is for you. The only problem is that, because it is so accessible, everyone is in on it now and that means prices aren’t that great. With a saturated market and low prices, you’re going to spend a lot more time doing this than other methods but you won’t run into any real road blocks this way. One thing you have to watch out for is price fluctuations. You might want to try to time the market when you sell your parts and you also might want to break them down into individual parts rather than whole sets depending on which method gets you more money. 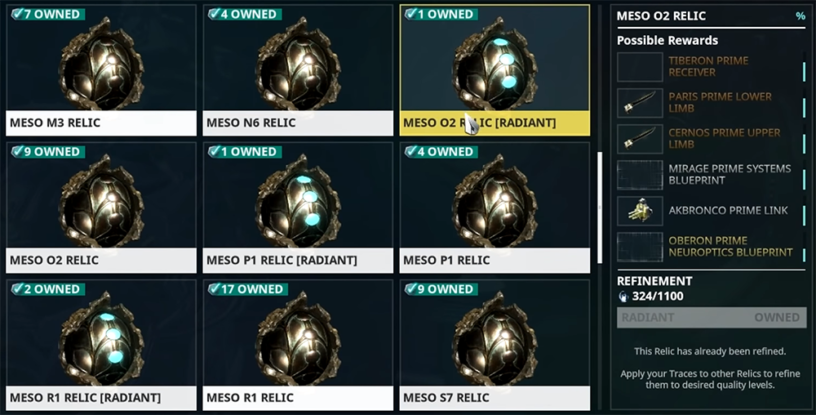 Another preferred method for earning platinum in Warframe is through the syndicate route. Simply play the game, earn syndicate points, and then spend them on gear you resell. Every syndicate out there allows its people to buy weapon parts, warframes, augment mods, and special weapons. Most people recommend that you buy the mods and sell them and to not waste syndicate points on weapons etc. unless you’re buying it for yourself. Again, you’re going to want to look at prices and see what the most optimal route is for you because things do change but syndicate points are an easy, pain-free way to earn money in Warframe.

An item that is always in demand but somewhat of a pain to obtain, corrupted mods are one of the most lucrative paths to earning platinum that Warframe offers even if they’re not the most gamer friendly. Like selling prime parts and other items, you’re going to want to check prices on the market to see what’s hot and go for that if possible. Some corrupted mods will be a waste of time to get and sell but you should still have a base level of 10 platinum for a corrupted mod. That said, it is always the better idea to find out what the market wants and for that if you can. Since this isn’t as passive as the first two methods you have a lot of discretion in how you proceed. We recommend that you strategize what corrupted mods you can get, what they sell for, and then go from there.

These come from special alert missions and so are somewhat rarer than corrupted mods though this doesn’t mean that they are necessarily worth more. In fact, some aura mods are kind of worthless and have very little value in terms of platinum. That said, check the market and see what is selling for what because you might be surprised. Also don’t ever part with something at a low rate just to get rid of it. It often pays to hold on to something for a little while to get a bit more platinum out of it if possible.

Dual stat elemental mods are found spy missions and some other level 40+ missions where they are rewarded. As with everything on this list, some are rarer than others and thus command a higher price so you need to do your research before selling these. As far as in how common they are, you can’t really farm this like you can prime parts and syndicate point gear but you can make some platinum if you stumble upon some dual stat elemental mods here and there.

Nightmare mods come from nightmare missions which means that you have finished every quest a planet has to offer. That’s quite a time sink which makes nightmare mods a less-than-ideal solution for a platinum deficit. That said, these mods really rake in the money and can be more than worth your time if you get the right ones to sell.

Ayatan sculptures are typically good for Endo but, if you have an abundance of that, you can make a good sack of platinum selling off your excess Ayatan sculptures to players willing to pay a few platinum for each one. Given how common they are, you won’t ever make a lot of money selling these but that makes this method an easier route than most on this list. The market for the sculptures isn’t that large but, as we’ve said, the supply is overwhelming so you’d be foolish not to take advantage of it. If you’re full up on endo then consider parting with some Ayatan sculptures to raise money.

This means that you part with the Riven mod as soon as you get it. Because of this, the prices are harder to pinpoint and predict. The nice thing is that these products are guaranteed to sell - and quickly. If you’re looking for a fast transaction, vending Veiled Riven mods is a good way to go. You can also buy and roll Riven mods until you get them to God Riven status and then sell those for a huge amount of platinum though that takes some commitment to achieve which makes it a more difficult way than some people would like.