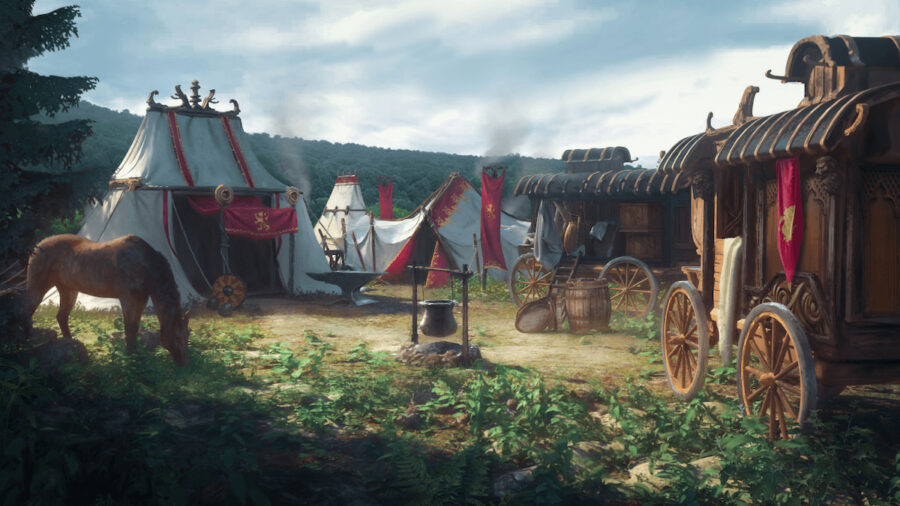 One word you'll hear a lot of while playing Ashes of Creation is "Nodes." It's impossible to escape this term—however you decide to spend your gameplay, whether you're adventuring, setting up shop, looking for a guild, or planning a marriage, you will encounter Nodes and have to understand their significance. So what the heck are they?

Related: How does Player Housing work in Ashes of Creation?

Nodes intersect with everything in Ashes of Creation. According to the game's developer, Intrepid Studios, Nodes are:

the heart of the world; they create the ebb and flow of life. At their core, Nodes are pre-set points in the world, wrapped in a Zone of Influence and surrounded by geographic areas that change over time based upon player participation.

Basically, Nodes are directly connected to Zones of Influence, which—as indicated by the name—are shaped by the actions of players. Players performing actions inside of Zones (fishing, mining, defeating monsters, etc.) and earning EXP contribute to the overall EXP of those Zones, which in turn "levels up" their Nodes.

As Nodes reach new stages, this will reflect in the growing civilization of the Zone. Player actions strengthen Nodes, which makes civilizations rise from wilderness to villages, then to towns, then to cities, and so on. As civilization develops, so too do other functions like government, taxes, and each player's ability to gain citizenship.

Nodes control every action you're able to take in Ashes of Creation, so their benefits are endless.

Some examples of what Nodes influence include:

Overall, it'd be best to keep in mind that the number of actions and roles you can take in Ashes of Creation are dependent upon your relationship to Nodes. Stronger Nodes = more opportunities for your character.

Read about the best Archetypes to choose in Ashes of Creation, or find out whether or not the game will be free to play. Be sure to check out our other guides for all your favorite video games.

All Playable Races in Ashes of Creation

Best Archetypes to choose in Ashes of Creation

How does Player Housing work in Ashes of Creation?

How to play Ashes of Creation Alpha

Will Ashes of Creation be free to play?