This is all around an interesting situation going on with Skull Trooper and Ghost Portal. First, Skull Trooper was thought for a while to be an OG only skin. It was never clear if it was going to return and it was one of the rarer skins. It seemed like it was likely to come back when the Red Knight skin returned after a long layoff, but we still didn't have concrete evidence. Obviously now we know it has returned, and Epic did a good job making it both accessible to new players and celebrating old players with an OG only style.

That leads us to the Ghost Portal Back Bling. This was one of the oldest leaked items in the game. It was long thought it was going to be paired with the Cloaked Star skin, which had been leaked and took forever to come out. Obviously, it didn't end up happening and the Ghost Portal was still on the sidelines. Finally, it has been revealed that the Ghost Portal skin can be obtained via the Skull Trooper Challenges. 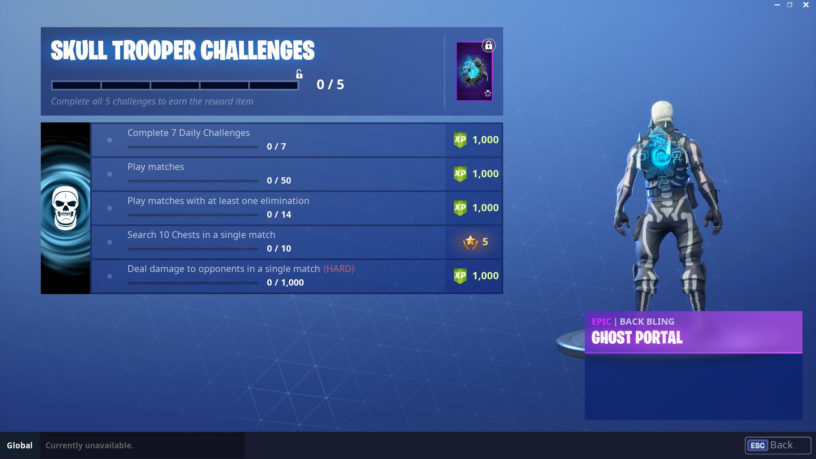 These challenges are going to take sometime to complete. It's not possible to complete these in one day due to the requirement of 7 Daily Challenges. You will have to be a bit patient with some of these.

This one is likely going to be the most time consuming portion of the challenges. These do not include your battle pass, so they are only the ones you get on a day-to-day basis. If you've already completed some of them, then you'll just have to wait until they refresh.

50 matches is quite a bit, and it depends if you care or not how well you are doing in these matches. Your best bet is just to dive for the most populated area and just be super aggressive. I don't recommend just queuing up a match and then jumping off a cliff. It might be against some rule to do this, and doing it 50 straight times would be pretty obvious to Epic. It's likely that they don't care, and you won't have any issues, but better safe than sorry.

Play matches with at least one elimination

Search 10 Chests in a single match

For this one you are better off gliding to the furthest part of the map away from the bus and just looting an entire area. Something like Junk Junction or anything named and on the outskirts. You should be able to get the majority of your chests from that area, and then maybe a couple more from some of the smaller places that aren't marked. If you are a good player, you'll likely just complete this without having to do something like this. 10 chests over an entire game isn't that many if you are slaying out.

Deal damage to opponents in a single match (HARD)

You'll need to do 1,000 damage to players in a single match. This is going to be way easier in something like duos or squads. You can knock someone and then deal more damage to their downed body. 50v50 would also be a good option, you can get a lot of headshot snipes which account for a lot of damage. Plus you can finish off anyone who is knocked.