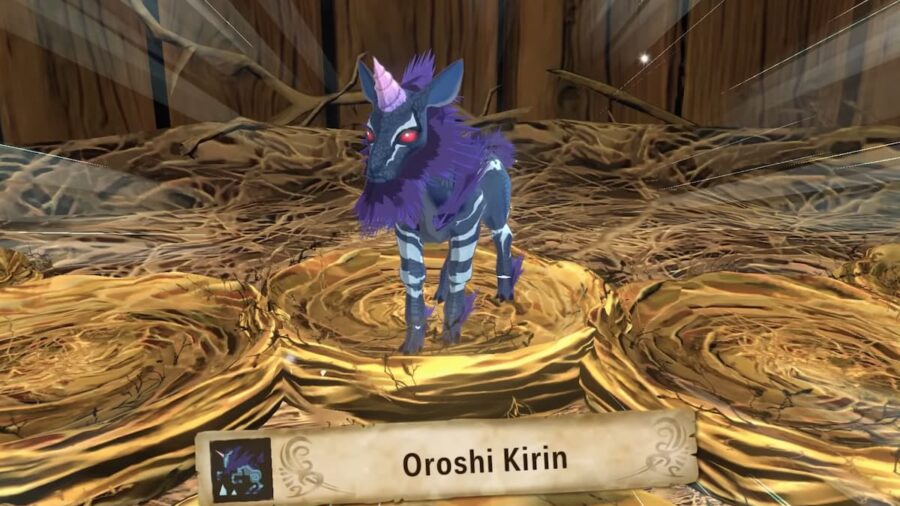 To get an Oroshi Kirin Egg, you first need to update Monster Hunter Stories 2: Wings of Ruin to 1.3.0. Once that has been completed, you need to interact with A Quest Board in any village, click on Subquests, and locate the 8 Star subquest Ice Phantom. This will have a yellow plus on the small picture, as it's a DLC quest.

Once the quest has been accepted, you need to head to Loloska Forest, in the Woodland area near Kuan Village. The easiest way to get there is by fast-traveling by Catavan Stand. Travel to the last area in Loloska Forest, and you'll see a High Rank Subquest Den. Enter it to find Oroshi Kirin.

Like any other den, explore the area until you find the nest where Oroshi Kirin lays in wait if you don't want to battle anything, to save items and the like. Have your leading Monstie as a Naragacuga, and use its Stealth ability to avoid all aggro from nearby monsters, to reach the den in peace.

Though Oroshi Kirin is small, it's extremely deadly. Bring along all monsties who use fire, but are also Technical and Speed. No matter how prepared you are, this is going to be a dangerous encounter. Use the table below to help.

Once the battle is over and Oroshi Kirin is defeated, you have an extremely low chance of obtaining the egg from the nest. It's entirely possible, but due to Kirin being an Elder Dragon. It may take you numerous attempts to acquire one. Just keep repeating the Ice Phantoms subquest over and over again.

Due to Oroshi Kirin being a deviant monster, the egg is altered slightly—the blue is slightly darker than the non-deviant egg.

Like normal, walk towards the exit of the den with your prize. Go and hatch it to see if you were lucky enough to get Oroshi Kirin as a Monstie. If not, rinse and repeat.

How to get Soulseer Mizutsune egg in Monster Hunter Stories 2: Wings of Ruin?

Where to find Dreadqueen Rathian in the Rhyming Riddle quest in Monster Hunter Stories 2: Wings of Ruin?