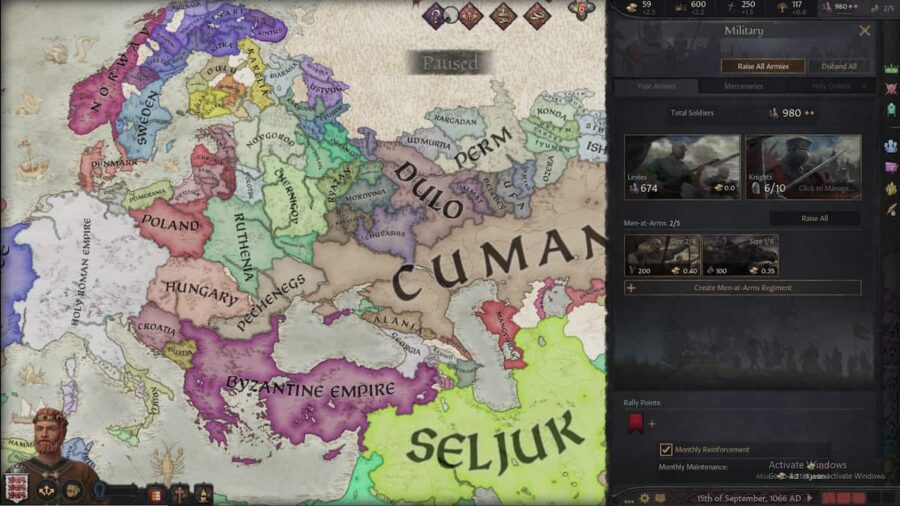 Raiding in CK3 (Crusader Kings 3) is a great way to earn gold without starting wars. This freedom comes with stipulations because you can only raid if you are an Unreformed Pagan, a Tribal leader, or have made the decision to Elevate the Kingdom of Mann & the Isles.

How to raid in CK3

Getting into a raid is like getting into war. Go to the Military Menu found on the right, and from there, pick Raise All As Raiders next to Raise All Armies. Now, just tell them to go to any territory you don't own, and they will begin to raid them, which is exactly the same as when you send an army to war.

Once a raid is underway, you cannot remove your army from that province until an outcome is reached. Raiders will earn loot once they are successful, but they must return home before adding it to your gold. Even if you aren't at war, the province's owner can still attack your forces. If the army is decimated before returning home, their loot will be recovered by their rightful owner.

Related: What is the best Duchy building in Crusader Kings 3?

What are the effects of Raiding in Crusader Kings 3?

Any province raided in Crusader Kings 3 is immune to raiding for five years after it has been raided, but raiding can be more devastating than war in a way. Any raided territory will receive debuffs, called maluses, for its construction time, taxes earned, and development growth.

How to sack during a raid in CK3

Any raided province also has the chance of being sacked. The player character has a 30 percent chance of sacking a province if they are leading the army. If you sack a province, you will gain more prestige, gold, and even slaves, greatly boosting your realm's development growth. Provinces that are sacked are immune from sacking for 20 years but receive larger debuffs during that time.

How to raid in Crusader Kings 3