Our Destiny 2 How-to Get Imperials Guide will walk you through the process of farming this valuable currency on your way to upgrading your Chalice of Opulence! The Chalice decides what kind of loot you will receive out of the chest at the end of a Menagerie run. So, you will want to make sure you have this fully unlocked as fast as possible to reap the best rewards of each play through.

You will want to fully complete The Invitation quest line, that will get you the Chalice of Opulence and some more Imperials along the way. Check out our guide for that right here.

How-to Get Imperials in Destiny 2

There's some different ways to get this done, but there's not a specifically best way to farm these. You're going to want to do all of them most likely!

Chests on the Cabal Barge

You'll be directed to this place early on in the process of gaining the Chalice of Opulence. It's a large spaceship that resides in Nessus in the Watcher's Grave. Head there and if you go on top of the ship, then head to the back you will see multiple chests there. They look like this: 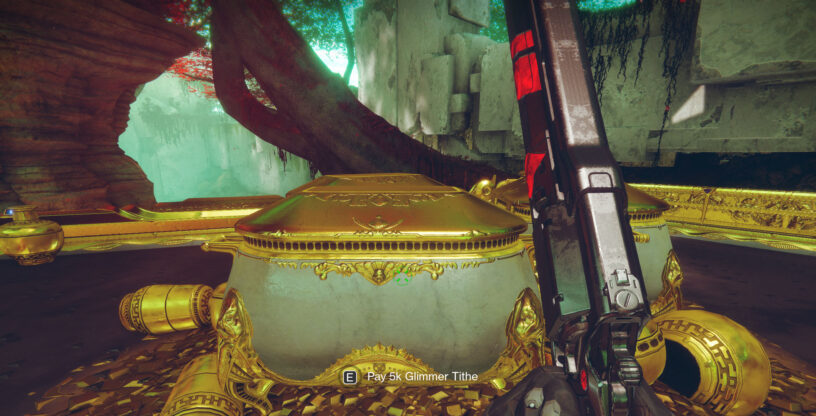 You can open each and everyone of these chests! Each one requires you pay a 5k Glimmer Tithe to open, but this is easily worth it because you get 150 Imperials for each one of these you open. You also get a bunch of runes by doing this as well, so it's worth your time to open all of these up. It has been rumored that these chests might respawn every week, but that has yet to be confirmed. We'll update this guide with that information if we find out more.

Upgrade Your chalice to Power and Efficiency II

This will cost you 3,000 Imperials, but after you get this improvement, you will have a chance to "rarely" gain Imperials by completing playlist activities. Upgrading this also gains you access to the following...

Use the Wealth of the Emperor Buff

You will first need to upgrade your Chalice with the Power and Efficiency II improvement, but once you do you will be able to purchase the Wealth of the Emperor buff from Benedict 99-40. This will "significantly" increase the chance of earning Imperials from strikes, Gambit, and the Crucible. It will also increase the likelihood of earning Imperials in the Menagerie. It costs 1,500 Glimmer and 10 Legendary Shards, so if you have a lot of currency burning a hole in your pocket, this might be a good way to use it.

There are weekly available bounties from Werner 99-40 that you can complete. There are 16 total different bounties to complete, but you'll only get access to four each week. If you complete one of these, you'll also complete a Triumph for the first time you finish it. That will gain you even more Imperials!

For just about every Menagerie Triumph you complete, you'll get 500 Imperials. These aren't super difficult, but they do require some time and effort to complete. You've likely complete some of them already if you have done a run or two of The Menagerie. Make sure not to forget to go to the Triumphs area in the menus and click on the specific Triumphs you've completed to collect the reward.

Here's a list of all of the Triumphs you can complete for Imperials:

Secret Triumphs for The Menagerie

Some of the Triumphs are hidden, so here's a look at some of the ones that have been found. Credit to this post on Reddit for the list!