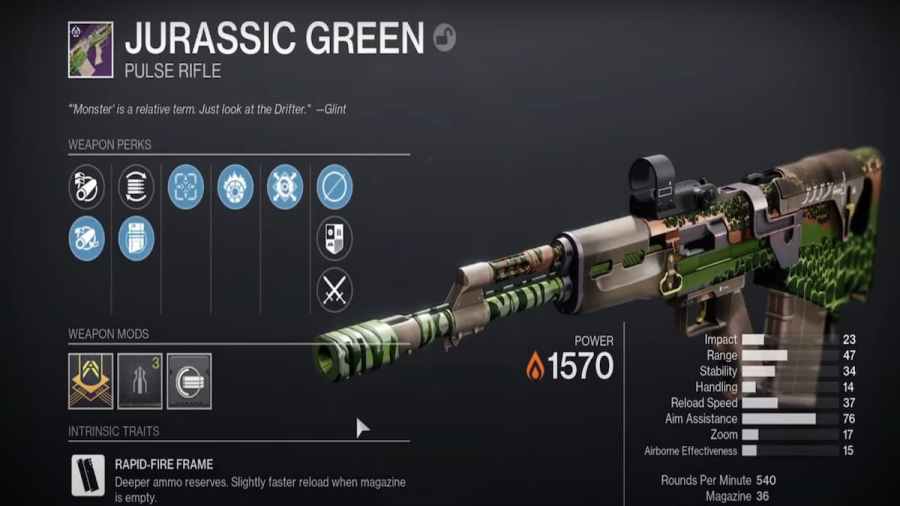 There are a couple of nice new weapons to farm for during Festival of the Lost in Destiny 2. It's still nice to see some of the big weapons from last year return. Many Destiny 2 players were pleased to see the Jurassic Green make a comeback, as it's really easy to go on a killing spree in PvP with this weapon. It's great in PvE as well, especially with a god roll.

Which are the best perks for the Jurassic Green in Destiny 2?

There is no need to stress over the barrel for the Jurassic Green, as it works well with several. Smallbore, Hammer-Forged Rifling, and Arrowhead Break all work excellently on this weapon. As for the magazine, players will definitely want High-Calibur Rounds for that extra power. This perk also increases the range of the Jurassic Green, which can come in handy during certain situations.

For PvE, It's best for the Jurassic Green to have Perpetual Motion. This perk is great in general for just about any weapon. When trying to dodge attacks from bosses and looking for good shooting opportunities, players will really appreciate the extra handling and reload speed that Perpetual Motion provides.

As for PvP, though, the Jurassic Green might be better with Rangefinder. When paired with the High-Calibur Rounds, the Jurassic Green can get pretty decent range for a Pulse Rifle. The second perk should be Incandescent regardless of whether being played in PvP or PvE. The ability to burn surrounding enemies is simply too powerful a boon to pass up on.