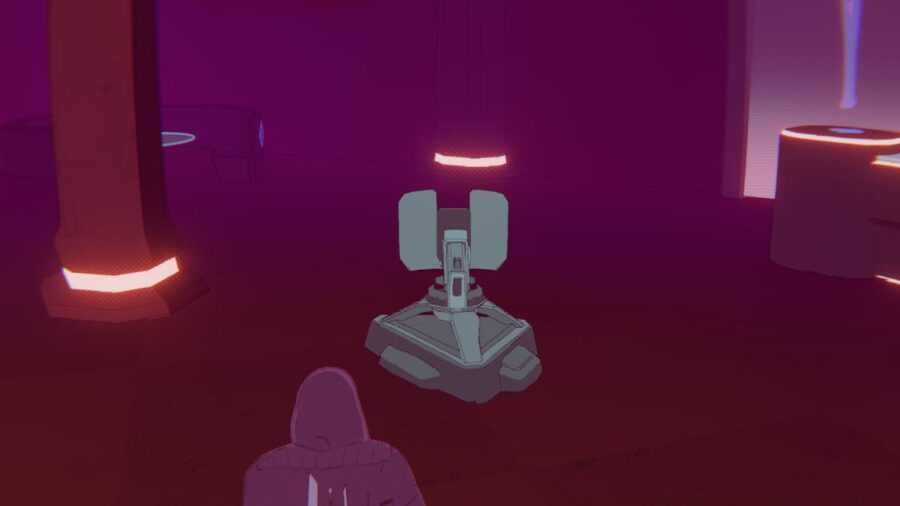 Escaping places can either be relatively easy or incredibly difficult. Foreclosed is the latter, as you are against placed gun turrets that can kill you in moments the second they see you. That means sprinting through and hoping for the best isn't an option either.

The best way to get through the turrets is by using stealth and also hacking them. If you are close to them, you can hack like you usually do with the four arrow inputs. Upon doing so, the gun turret will deactivate.

Related: How to get Explosive Bullets in Foreclosed?

Each gun turret revolves on a pivot, meaning they have a limited viewing angle, so they have a massive blind spot to sneak around. You can easily take a few moments and decide on the best place to go where the current isn't pivoting to sneak on by using the tons of cover the room provides, then when behind it, hack into it, and one less turret to deal with.

Sure, you can attempt to stealth through it, which is possible. But the one near the exit of the room is placed solely to destroy all aspects of stealth. Even using the shield implant ability, without disabling any turrets, all in view will open fire, and you are dead.

For more Foreclosed guides, Pro Game Guides has you covered!

How to unlock the Disco and Lounge doors in Lussuoso Club in Foreclosed?

How to overheat enemy implants in Foreclosed?

How to reach the Secur Tech vehicle in Foreclosed?

What happens if you kill The Expert in Foreclosed?

How to open the gates to get to Bizowski in Foreclosed?