There's a new gun added in the 2.4.0 patch of Fortnite Battle Royale and it's the Minigun! Check out all of the information you could possibly want on the new addition to the game in our guide below. 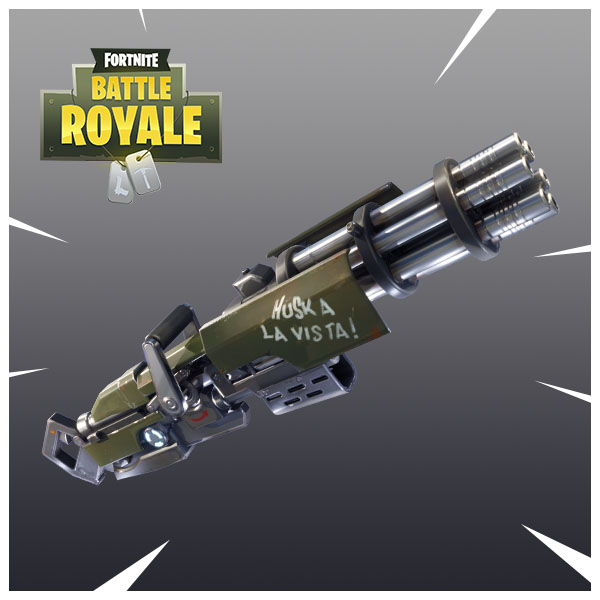 The Minigun uses LIGHT ammunition, which is the same stuff you'll find for the Pistol, Revolver, SMGs, and the Suppressed Pistol. The clip size is.... However much light ammo you have! So you will no longer want to skip that light ammo that's floating around because this thing will eat it up when you use it. You can continually hold down the fire button and it will continue to shoot until you run out of ammo.

While the Minigun shoots almost as fast as an SMG, it does have a delay on it before it starts firing so you won't want to expose yourself until that delay is over.

Looking to get better? I highly recommend our Fortnite Tips post!

Minigun Rarities & Where to Find it

The minigun comes in two rarities: Epic & Legendary. It can only be found in Chests and Supply Drops according to the official patch notes. If we see it as a normal loot spawn we will update this post.

It's very early in the lifespan of the gun so these might be updated in the near future.

The big weakness of the Minigun is how exposed it makes you while firing. You can't relent to the pressure, it's generally going to be better to just attempt to shoot the person with an AR at mid-range or close the gap with single ramps and go for a shotgun kill. The Minigun is very inaccurate, so the quicker you just go for the kill the less likely they are to hit you enough to kill you.

You can watch here as Ninja faces down another player who is using the Minigun. He is able to throw down a couple of walls, use movement, and then continually fire back so he can take down his enemy even under constant pressure.