In Fortnite: Battle Royale, Retail Row is one of the most popular destinations for people looking to get strong loot and a taste of battle. Our guide goes through the ins-and-outs of this destination and will get you ready to take on all comers!

There are two distinct areas in Retail Row. We call them houses and black tops. The west side of Retail Row is mostly made up of houses, some busted and broken, while others are intact. The east side of Retail Row is the actual retail section that has a grocery store and various shops. We call this black tops due to the roof colors being black. It's important to make a distinction if you plan on playing in squads or duos to land in at least the same area. Teams usually go down when you separate too much. While I'd recommend not landing in the same exact place, you should land very close to each other so you can help one another depending on the situation.

There are some areas of retail that you should have names for which can help make communication with your team a lot better. I will also be referring to these areas by these names throughout the guide, so knowing these will also help you understand this article better.

I'm starting with the east side of the map and start from there.

The most obvious and one of the signature spots in Retail Row is the water tower. It is on the south east side of the map, and will sometimes have a chest spawn here. You can land on this, grab a quick gun and potentially pick off people directly north of you that have landed on the blacktop roofs. You will want to break down the water tower portion below you and land on the roof of the small shed or the fence. You can sometimes find a chest or gun in the shed area so it can be worth checking.

You do NOT want to spend much time on top of this area, you are super vulnerable from a variety of areas if they grab a quick assault rifle can pick you off.

Right next to the water tower is a small diner that can sometimes have a chest in it. Other than that this place is not worth checking out so listen for the chest and if you don't hear it then skip it.

Next to the diner is a book store that has a bunch of bookshelves and a small room on the first floor. If you go up the stairs there's more bookshelves and a room that can have a chest, gun, or ammo boxes. From the room on the second floor you can break out the wall to the north and continue onto the roof and into the door leading to the big fish/tackle shop.

If you know someone is on the second floor, you can actually attack them from the back where there's a window. This can sometimes catch them off-guard and can get you a quick kill.

These are a one floor area between the book store and the fishing shop. You can find guns and ammo here, as well as wood pallets that yield quite a bit of wood.

When I'm landing blacktops, this is where I usually head for if I don't immediately find a gun. There's a door on the roof of the under construction buildings that leads into an area that most often has a chest in it, as well as multiple ammo boxes. You can then run from there downstairs and potentially pick up some of other guns and ammo. I like to then go through the back and either loot the caged area, or go to the under construction rooms and get some more quick loot.

We refer to this as the cage, and it actually has a fair amount of loot most of the time. If you see someone is going to grab a gun or land before you on the blacktops then this is a pretty good area to veer to in a pinch. Always check this area if you are landing near here because a lot of people ignore it.

As we start to now move west we find a small shop that isn't usually worth checking. I would also RARELY go through to the front of this area, always head to the back to avoid being seen or hit from other areas like LeBron's House (house with the basketball court) or from people rotating from that house (popular landing spot). In the back, you can also enter a small storage area that sometimes has a gun or ammo.

While you are back here listen for a chest in the shipping truck, this is a good spot to hit if you are landing as the chest is usually always here.

If you have gone through the back there can be a chest spawn above the garage door. Break it down and listen for it and climb your way up if its there. There's also a new chest spawn towards the back of the grocery store, so be sure to check for that. Guns will spawn in-between the aisles, and the upstairs area can sometimes have guns that is often overlooked.

Be careful of the entrance area to the grocery store, it's a perfect spot for a trap and is popular for this.

This is an area you want to avoid for the most part. There's a lot of scattered cover, but if you get in a gun fight here you are vulnerable from all areas of the map. Anybody on a blacktop roof, or LeBron's house can spot you and hit you pretty easily.

Not a great spot for guns or chests, but should be checked if you are doing a full loot or are in desperation to find a gun.

I'm going to start from the south-eastern most portion and work my way over. These areas aren't as distinct and only one house in particular really needs to be covered.

Probably one of the hottest landing spots is referred to as LeBron's house (or just Lebron's). Why is it called that? Because it has a basketball court right next to it! This is a great spot because it's a huge house, and has three potential chest spawns: dog house, big roof, and garage roof. The second floor has three rooms that can all have a gun, and the first floor is worth checking out as well.

People will often "roof camp" on this house. It gives you a good angle on both sections of Retail Row, so you can pick people off from either side and be protected.

This is one of my favorite places to land when going to houses. It's on the corner so you are mostly protected from the south and west side of the map. There's also two chests here: one in the roof, one on the second story right below the hole in the ceiling. The one on the roof is pretty consistently there, there's also potential for guns in this area. If you are landing there and someone else is as well, always go for the gun first and try to kill them rather than just going for the chest.

There's also something we call two-story brick that is pretty good to land at as again it has two chests and is on the edge of the map which protects from danger. The other two houses also have two chests and can be good. The other busted house has a chest in the roof and in the cellar. Just be careful when grabbing the cellar chest not to get trapped down there. It's a pretty awkward area, and if someone runs up on the house you are at a pretty big disadvantage.

For a more visual view, I've color-coded areas that are most commonly referenced. 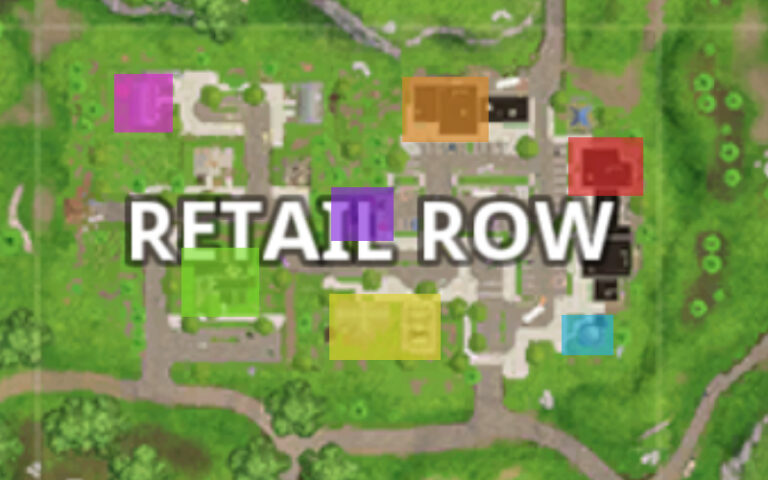 I've mentioned some above, but here's a more broken down list:

Here's a look at where all of the chests are in Retail Row (thanks to fortnitechests.info). In the house area, the majority are in the roof and over the garage. The house in the middle has one in the cellar, LeBron's has one in a dog house. The most reliable ones in the blacktops are on the water tower, second floor areas, and the one that's behind NOMS in the shipping truck. 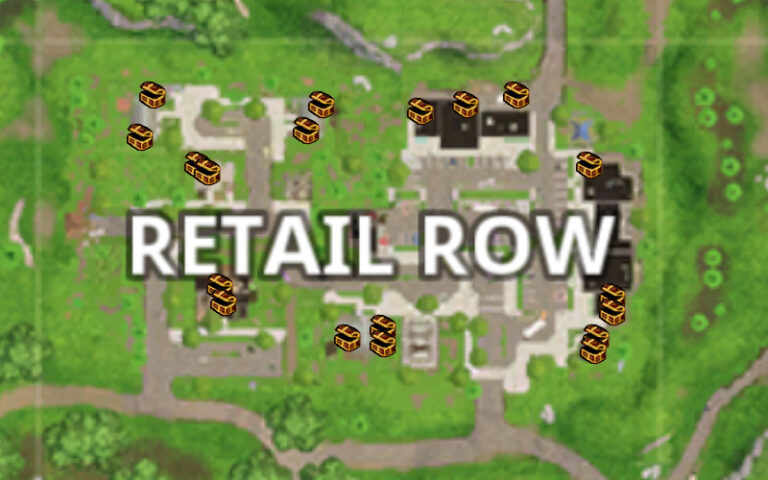 If you're wondering how you should proceed through and loot all of Retail Row then here's a couple of paths that I would recommend. 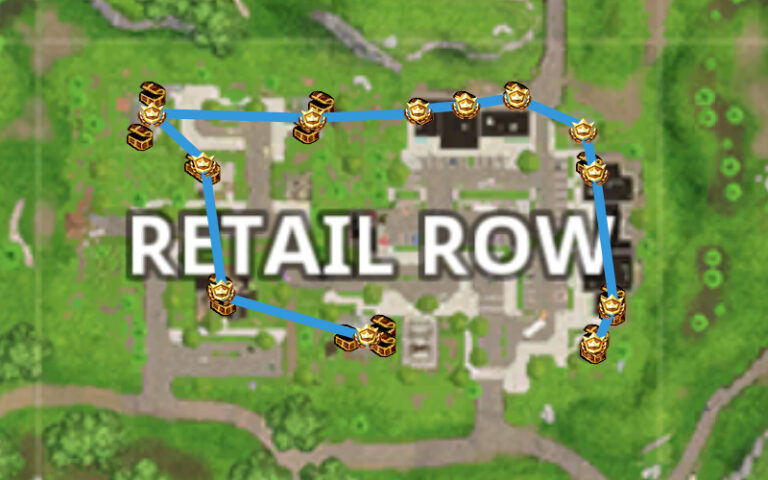 This first path starts at the Water Tower and proceed through the blacktops hitting all of the chests. The fourth point is the cage area which is often overlooked. I find that the blacktop area is less frequented, so let people fight it out in the houses while you get a nice kit. You might want to take pauses on the roofs now and again to check for people rotating through the parking lot.

Transitioning from the blacktops to the houses can be a bit dangerous so be careful here as you'll get some roof campers or people looking for rotations out of the blacktops. If you saw a lot of people dropping to Retail, it might not even be worth continuing after the two story brick to the north west. You can transition to factories which is not far from the west and can have good loot there if it wasn't ransacked already. 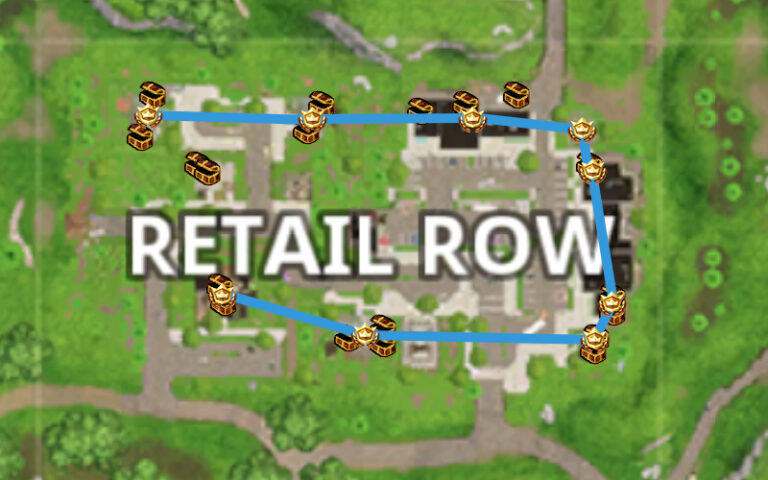 Our next path starts at the broken down house at the edge of town. It's one of my favorite landing spots in the houses section of Retail Row. Grab the loot there, and hopefully get to LeBron's house before the person who landed there has a chance to really kit up fully. You can move on to blacktops and go from there based off of who you encounter and how the loot pans out for you. Once you reach the final brick house, you can transition towards Dusty Depot or the Factories.

During some of the Battle Pass challenges there has been spots in Retail Row that you have needed to visit. Here's a list of them if you are late to completing your pass, or need to reference them for another challenge in the future. 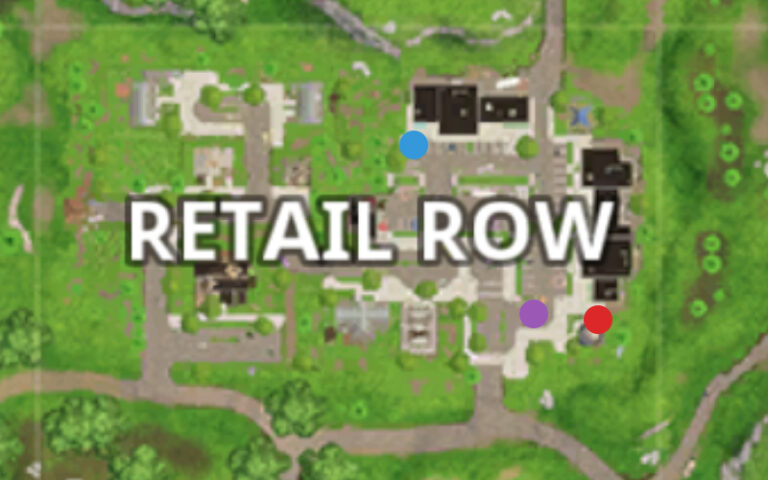