Well, if you thought it was crazy that the island was basically overcome with water, then boy was it a shock to see a bunch of different vehicles rolling through in the Season 3 trailer! We're going to look at the car driving mechanic that will be added to Fortnite at some point during the season.

If you're wondering how to drive cars in Fortnite right now, you're going to be a bit disappointed. You can't currently drive cars because of the water level on the map. There wouldn't really be enough area to justify it currently. However, you can expect this mechanic to appear further into the season as the water dissipates and more of the map becomes exposed. While you can't drive in cars just yet, you can hitch a ride on a shark!

Here's the exact quote and details from Fortnite's official website:

As time goes on and water recedes, even more locations will be uncovered. And as the roadways become more open, you'll discover new ways to get around...

You get a quick glimpse of the cars driving around in the battle pass game play trailer:

Based on that trailer, it looks like there's going to be a whole lot of vehicles you can ride in. At the very least, there's going to be a some sedan like cars and a taxi. You'll be able to drive a couple of different pickup trucks, and even hop into a semi-truck without a trailer. There's also what looks to be a speedier sports car! You can see the gray sports car that will likely be the faster/fastest vehicle you can find. There's also the pickup truck trailing behind, that can have an additional player possibly in the bed of it. 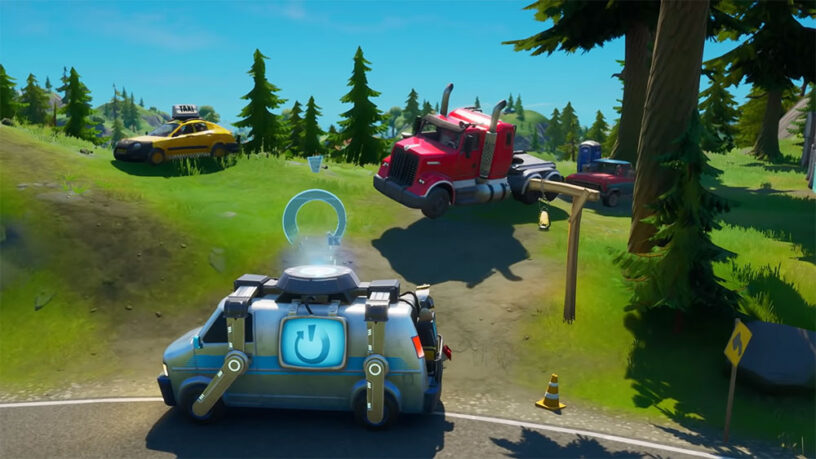 You can then see the taxi cab and the semi-truck rolling through! The big truck will likely be a tank in terms of it will be hard to destroy and have a lot of health points.

Driving the cars will likely be the same as any other vehicle, you'll just be able to interact with it to enter it. Based on how these vehicles look, I'm not going to be surprised if there's a whole lot of them available across the island. They will probably spawn in places related to the place of interest. General cars will probably spawn in places like Holly Hedges and Retail Row. The trucks will spawn in more rural areas potentially, stuff that is likely to end up showing after the water recedes.

That's everything about cars we know so far! We'll be updating this guide with further information once it becomes available.

How to destroy and collect telescope parts in a single match: All Telescope Locations