Our Fortnite Season 10 Smash & Grab Challenges Guide walks you through everything you need to know about this mission for the Season X Battle Pass! We've got a full list of the challenges, solutions, rewards, and a cheat sheet that should easily get through through this set of objectives.

This is another of the themed, weekly missions that will be appearing during this season. The theme behind this one is all about landing and quickly smashing or getting eliminations! You'll be doing a lot of tasks that require you to immediately accomplish goals after you land from the battle bus or a launch pad.

There's no need for a full cheat sheet this week, you can find tips for individual challenges below.

The rewards for these challenges are based upon how many you've completed.

You'll need to do this in three separate games, but it's extremely easy so just locate a chest. You could even drop onto a roof of a house and break in find and open a chest with time to spare.

Land at a Hot Spot in different matches (3)

Hot Spots are the areas on the map with yellow lettering. These are different each round you play, and they have Loot Carriers floating around that will drop some sweet items for you. You could probably combine this challenge with the previous one and get them both out of the way quickly.

Deal damage within 30 seconds after using a Launch Pad (100)

Head to Team Rumble for this one, there's always Launch Pads being placed in that mode, and there's a lot of enemies to deal damage to.

Search 2 chests within 30 seconds of each other (3)

There's a lot of various spawns around the map that will have two chests next to them. There's a pretty reliable spot near Lazy Lagoon that will usually have three chests at it.

Pick up a Legendary Item in different matches (3)

Team Rumble is made for this one, you can get a whole area to yourself to loot, or you can open up a Supply Drop which pretty much guarantees a Legendary item.

Search a Supply Drop within 10 seconds of it landing (3)

Another easy challenge, this one is great in Team Rumble. There's periodic Supply Drops that fall from the sky, and they aren't largely contested usually. Just shoot it down and immediately loot it, just don't forget to box yourself in!

You've already landed at these, so now it's time to deal damage to opponents at them. This is one of the few that I wouldn't do in Team Rumble, because you aren't likely to get a circle that will have a Hot Spot in it.

This is really easy, you can usually find a chest and an ammo box together in a roof of a house. There's also plenty of open area chests floating around that have ammo boxes nearby.

Loot Carriers only spawn in Hot Spot locations, so head to one of the yellow named areas. The hardest part of this will be finding a weapon quickly enough to destroy the carriers, which are usually floating high above the ground. Look for a weapon as you glide into the area, and immediately start breaking the carriers. You could likely finish this in one round.

Team Rumble makes this one very easy. Launch Pads are common in this mode, so just bounce off one and land near someone and go for the elimination.

Search 3 chests within 30 seconds of each other (1)

This one could be somewhat difficult, but there are spots that have three chests really close by. However, they aren't always guaranteed to spawn, so you might need to get a bit lucky. I mentioned one place earlier, which was the beach spot near Lazy Lagoon.

If you want to go way off the map, there's three possible chest spawns close by on the big island that is south west of Happy Hamlet.

Expedition Outposts (those red tent like buildings) also have the possibility for triple chest spawns. Those are a good option if you aren't having luck elsewhere.

Pick up 3 Legendary Items in a single match (3)

I'd do this in Team Rumble, try to hit up some Supply Drops for some mostly guaranteed Legendaries. I'd also try to do this in a group, because your squad can go to separate loot spots and hopefully find some Legendary items. If so, you can come together and drop them for each other. That should settle the requirement to get three in one match.

This one could be potentially difficult, because this would be hard to do in most landing spots. A Supply Llama might work, but I'm not sure if that qualifies as "collecting" material. If someone uses one, let me know if it works in the comments! 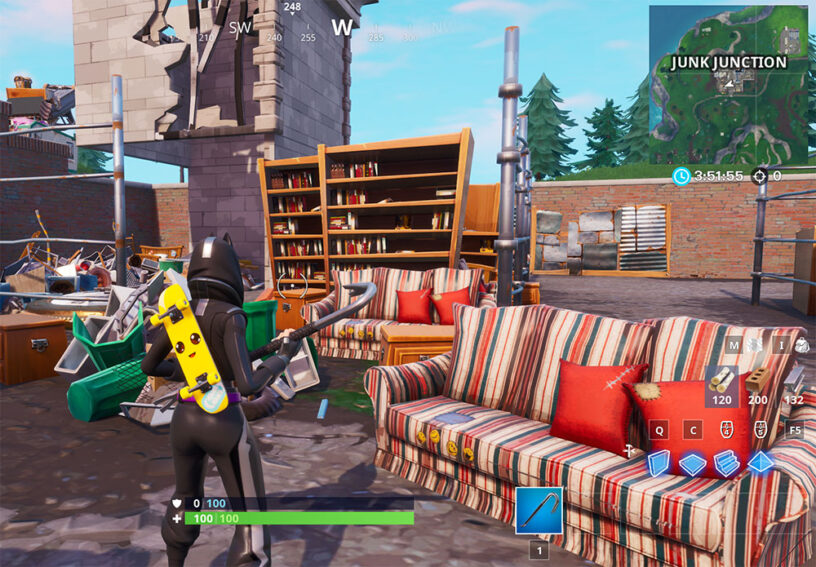 Harvesting isn't out of the question, and there's actually a really good place to do it. You will also want to do it in Team Rumble because you gain more resources when you harvest. Junk Junction has a spot with all three materials in abundance. It's in the south western corner of the area, it has a bunch of bookshelves and couches for wood, and has multiple small junk piles that can be either metal or brick. If you don't get enough from these piles, there's metal fencing and a brick building to harvest. If you don't get enough brick, there's a couple of stone boulders right outside of the entrance. You can also harvest the big brick wall that surrounds Junk Junction! 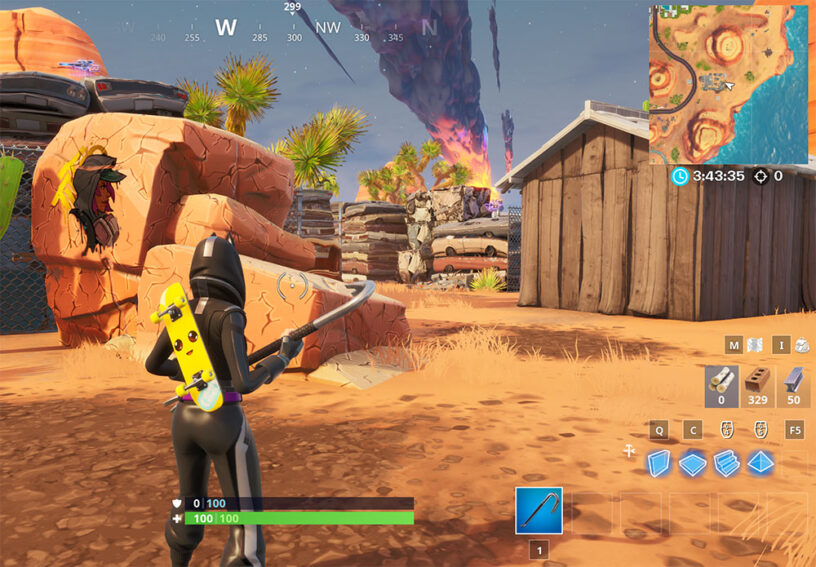 Mini Junk Junction is also a potential option. On the east side of it, there's a cactus and couple trees for wood, a big bounder and some junk piles for brick, and there's all the junked cars for metal!

Eliminate an opponent at a Hot Spot (3)

This one will be unreliable in Team Rumble, so only go there if you think you'll struggle in normal battle royale. There's not a great trick to this one, just head to a Hot Spot location (yellow named on the map) and get some eliminations. You don't have to do them in one match, so you should be able to grind it out.