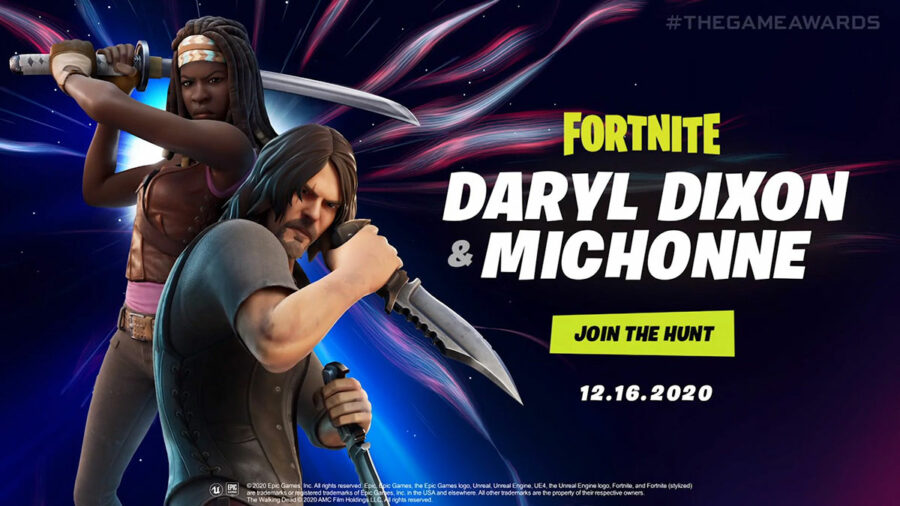 "The Zero Point has formed a portal to the "The "Walking Dead" dimension! The skins of TWD will be in tomorrow's Item Shop!"

The Zero Point has now formed a portal to the "The Walking Dead" dimension! The skins of TWD will be in tomorrow's Item Shop!

According to @FortTory, the same portal will also be used for the upcoming Marvel skins! pic.twitter.com/5DK995XofW

Epic continues with the huge crossovers into Fortnite! There was recently Kratos from God of War added to the game, along with Master Chief from Halo recently finding its way onto the battlefield. The newest announcement is that The Walking Dead is going to be added as skins very soon!

Both Daryl Dixon and Michonne will be added as outfits to Fortnite on December 16th, 2020. They will likely be paired with additional cosmetics, including some pretty sweet new harvesting tools based on the promo image. There is also a trailer involving Agent Jonesy falling into their zombie ridden world and teleporting them into the world of Fortnite. This stays on the theme of the current season, that is all about the best hunters from various times and dimensions! You can watch the trailer below:

As far as we know right now, it looks like it will just be cosmetics added to the game, but it's possible that some creative stuff could see the light of day. With the Halo collaboration, there's a recreation of a familiar map to that universe, so it could be possible some kind of zombie based mode makes its way into the game!

We'll have to wait and see when the outfits come out what else that Epic has in store for us!