We're taking a quick look at how to get a lightsaber in Fortnite! These have just been added to the game right after the Star Wars live event that showed off the Millenium Falcon flying around in-game as well as the exclusive video clip from the movie. It was a pretty fun event, even with some of the connection problems they had. Now that the event is over, you can find yourself a sweet lightsaber that you can hack and slash your opponent's with. Not only that, you can block incoming gunfire, which makes these pretty good when running towards an enemy!

How-to Get a Lightsaber

If you're looking to hack and slash your enemies to bits with one of these glowing swords then you are going to need to look for a specific chest. You can get a lightsaber by opening a glowing blue chest that can be found all over the map where treasure chests generally spawn. They are pretty hard to find, so keep your eyes out for the blue glow when you are scavenging around. 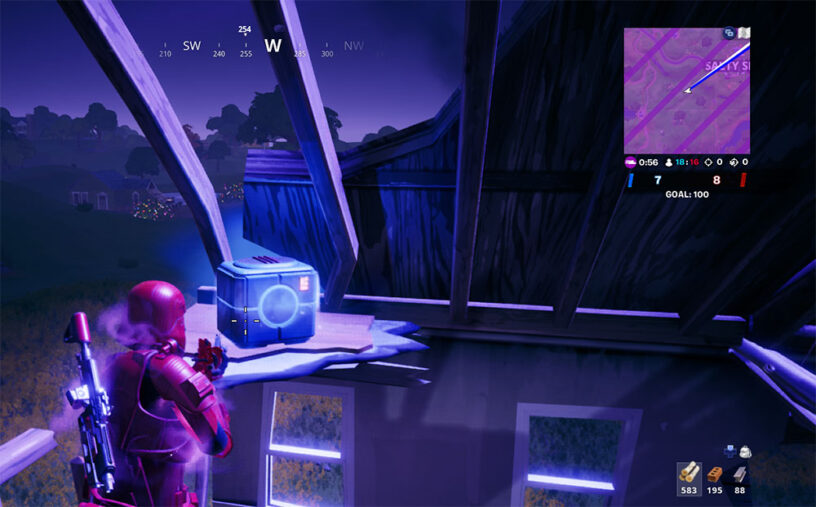 All four different lightsabers drop out of the chest, so you can pick the color you want (options shown below).

How-to Use the Lightsaber

They are pretty easy to use, you just hit your fire button to slash. If you continue to swing it, on your third swing you will do a smash attack that does 150 damage if you catch anyone with it! You can also block with your aim button (usually right click or left trigger). As long as your facing your opponent when they fire bullets at you, you will block those projectiles. Notice that I said bullets! That's because you can't block a rocket, so don't get caught trying to do that!

There's one other thing you can do, and that's a combat roll. To do that you need to hit be blocking and then hit the jump key. You will roll in the direction you were headed, which means you can roll forward, left, right, or backwards. You can even do a jumping roll if you do it in the air!

There are currently four lightsabers in the game that you can find and utilize in the field of battle. You've got Rey's blue, Mace Windu's purple, Luke's green, and Kylo Ren's red lightsabers to choose from. Each one is visually different, but all of them operate the same way!

How-to Get a Lightsaber in Creative

If you're looking for a lightsaber in creative right now then you are out of luck unfortunately. You can't add them to the game or find them in the playground. Hopefully, we will get access to these in the near future, but because it's part of a special event, it might only be for a limited time. We'll update this post with any information we find out if this happens to change!

I know everyone is clamoring to see if there's going to be a pickaxe that is a lightsaber, but it is unclear at the moment if one will happen. Due to the fact that they are in the game as a weapon, it makes me think that they won't end up being a purchasable Harvesting Tool. I've been wrong before though, so hopefully one of these is encrypted because none of the leaks have found anything about the possibility of one being in the files just yet (unlike Kylo Ren).