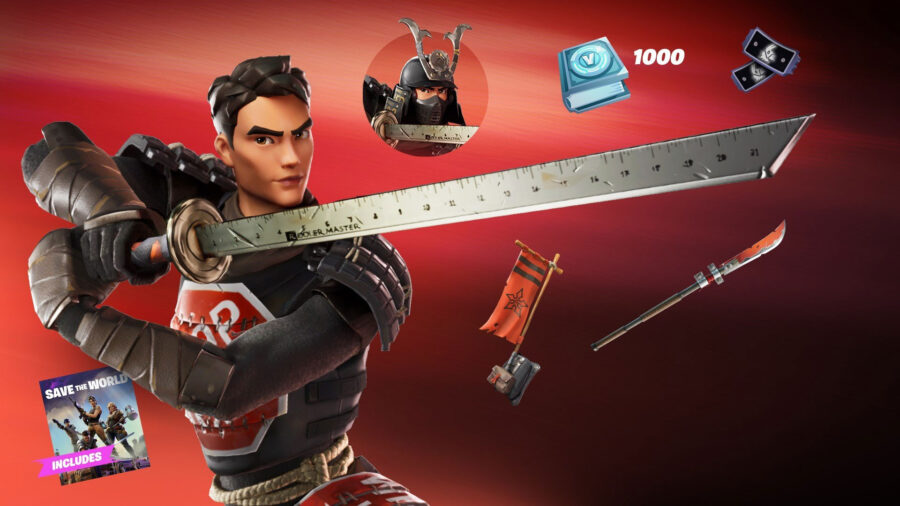 If you were a fan of the Metal Team Leader pack that got released for Fortnite's STW then you will surely be a fan of the Samurai Scrapper Pack! This is very similar to the previous bundle, and will get you access to the Save the World PvE campaign, a new hero, weapon schematic, and a brand new skin with back bling that is usable in Battle Royale or Creative! You can also complete the challenges along with this skin to earn up to 1,000 V-Bucks and 1,000 X-Ray Tickets by completing Save the World daily quests!

Here's a full list of what you receive in the Samurai Scrapper Pack:

This bundle was leaked previously, but you should be able to purchase it for $15.99 USD once it is available in your part of the world. It is important to note that you do not receive the Ruler Sword that you see in the promo images. That is a usable weapon that you can find in the Save the World mode, but it is not the pickaxe you get if you were to play in Battle Royale or Creative. You also don't get the other orange pickaxe that is displayed, that's for STW only and not part of Battle Royale!

If you're a Fortnite player who wants to save money, then this is a pretty great deal due to the amount of cosmetics you get as well as additional V-Bucks. It's also even better due to the price reduction that was given to players due to the whole Apple vs. Epic battle.