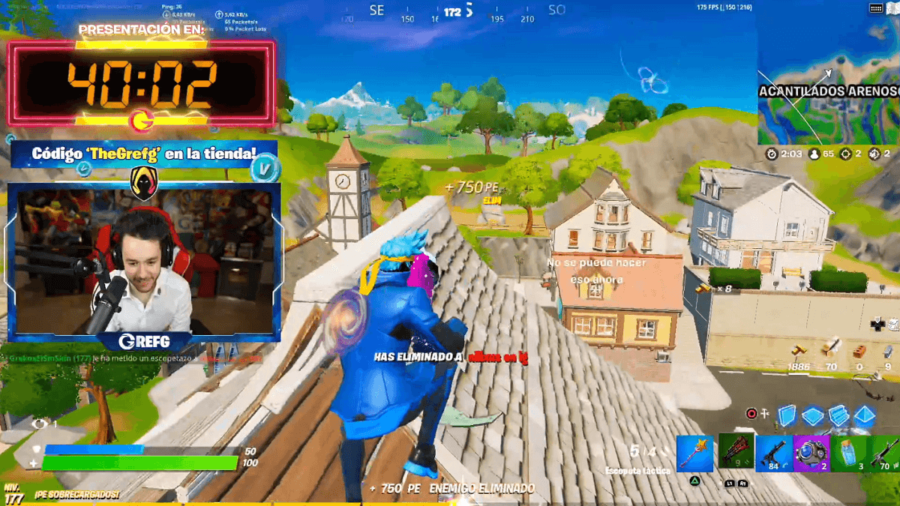 The time has come TheGrefg has shown off his Fortnite cosmetic set, and at the same time, TheGrefg has broken his Twitch record and became the most watched stream on Twitch with over 2.4 million+ viewers! He has tripled his current record. The Spanish Fortnite community has not held back on the hype of this epic reveal. It's truly astounding!

Epic Games has sent TheGrefg his picture of the Icon Outfit, his Emote, and a video to go with it! Here is what you've all been waiting for the reveal!

The skin is reactive and comes with a full set, that comes with an Emote, a Harvesting tool. That's not all, The Floor is Lava mode is coming back for a special cup, that's right TheGrefg's Cup! This will take place on Jan. 14 to 16.

TheGrefg was not the first to get an Icon series, as that honor goes to Ninja, and he most certainly will not be the last. At this time, there are seven Icon Skins, and TheGrefg will become the eighth.

Even Mark Rein, the Vice President and Co-Founder of Epic Games, tweeted about TheGrefg's amazing viewership!

Thank you @FortniteGame community for breaking yet again another record! Congrats to [email protected] for being the one to do it! I'm not crying at all! Not at all.

Thank you @FortniteGame community for breaking yet again another record! Congrats to @TheGrefg for being the one to do it! I’m not crying at all. Not at all.

Mark was not the only one sending tweets in congratulations; World Cup Solo winner Bugha did. The owner of FaZe Apex sends his best congratulations! The Fortnite community is in an uproar about this momentous occasion! And of course, the first Icon, Ninja, has also tweeted out!

2.4 Million live viewers on his Fortnite skin Debut! Congrats @TheGrefg absolute monster and you deserve it!

2.4 million live viewers on his Fortnite skin Debut! Congrats @TheGrefg absolute monster and you deserve it 🙌🏻

For those of you, who currently don't have the Vbucks for the outfit on day one, do not worry, as according to FortniteGLAT, TheGrefgs Icon Outfit will stay in the Fortnite shop for four days after its release!

Translated: Grefg's Outfit will be available for 4 days in the Shop. It will reveal the date in 1 hour 10 minutes.

For those of you who are unsure of who TheGrefg is, he's a 23-year-old Spanish gamer and vlogger called David Cánovas. His Youtube channel has a whopping 15 million subscribers, and as we said above, he's broken his record of 660k by a decent amount.

How to slide in Fortnite Chapter 3 Season 1