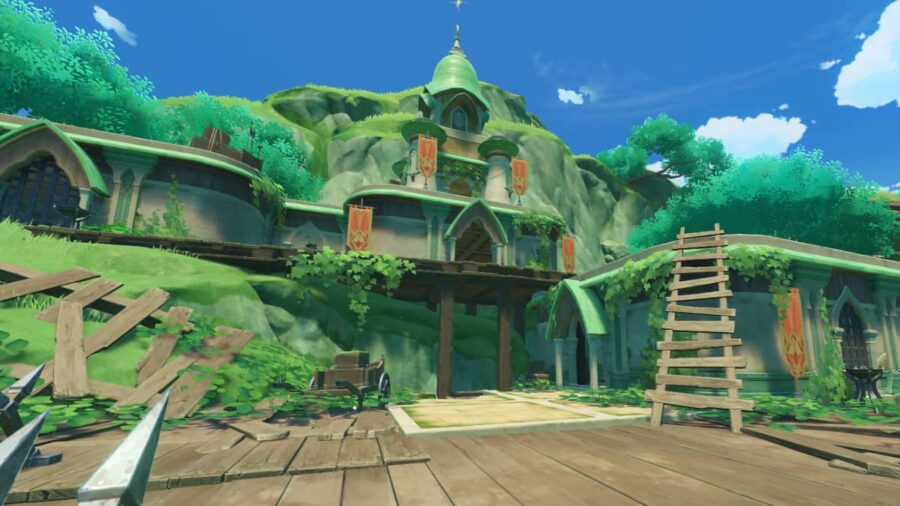 In the Yasna Monument, you'll find an Eremite camp with an Energy Extraction Device that can be diffused with the help of Control Keys. Reference the image below to find the exact location of the Challenge. Since the area is swarming with enemy Eremites, make sure to bring a battle-ready team.

Once you get there, you'll find a mechanism called an Energy Extraction Device. Approach it to begin a Challenge where you must find two Control Keys to deactivate the Device.

Related: Who is Capitano in Genshin Impact?

In this part, you need to find the two missing Control Keys in order to shut down the Energy Extraction Device. You can obtain them in any order.

There's a hole beside the Energy Extraction Device. Jump down to enter the building, where you'll immediately spot the first Control Key. After approaching the Key to claim it, exit the building by following the path to the next room, then outdoors.

After exiting the first room, jump down to find the entrance pictured above. Enter the room to immediately spot the second Control Key. After claiming it, defeat the Eremites and interact with the mechanism beside the gate to open up an exit.

After obtaining the two Control Keys, interact with the Energy Extractor Device at the top of the building to begin a battle segment. A circular gauge will appear above it. Your goal is to stand beside the Device until the gauge above it becomes full. If you're too far away or if there are enemy disruptions, the gauge will stop filling up, so make sure to defeat all the enemies that spawn and stand close to the Device afterward. Once the gauge is all filled up, the Energy Extraction Device will turn off, rewarding you with an Exquisite Chest.

Check out our guide on How to solve the Energy Extraction Device Challenge south of Old Vanarana in Genshin Impact to solve a similar Challenge in Sumeru.