Blizzard's announcement of the Hall of Fame was quite a shock to the community at the time. The philosophy when formats were announced, was that the Classic set would remain intact and not be touched. I believe they were concerned that players would not feel comfortable investing resources into cards if they weren't sure the cards would be around for a while. Thankfully, when Blizzard decided to go in this direction, they gave players full dust refunds on the cards they owned (at least up to a collectible amount). This made the addition of this new set to the game a lot more palatable for players.

The cards were announced on February 28th, 2019! Cards will be shifted into the Hall of Fame on April 9th, 2019 when Rise of Shadows releases!

Unknown at this time! It was a bit of a shock when it was announced and is an unprecedented decision that Blizzard has made. We'll have to wait and see when this happens.

Believe it or not, Blizzard has added some cards back into the set to replace some of the ones that were removed. You might not have heard about this because the cards basically see little to no play, but here's the list of cards that were added to the Classic set:  Icicle ,  Tome of Intellect ,  Call of the Void , and  Pilfer . 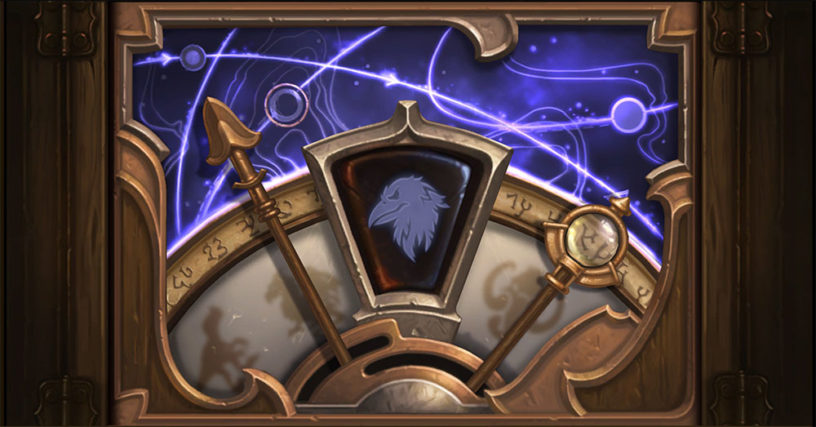 Yes, believe it or not, there will be another couple of additions to the Hall of Fame in 2019! This is a total change from the norm, so we aren't sure if it's going to happen again in the future. For now, take a look at what's being added to the Hall of Fame next:

While we like Rogues’ knack for getting out of sticky situations with targeted removal, Vanish allows them to effectively clear an entire board. This negates one of their intended weaknesses, reduces our ability to design towards their strengths, and makes it much harder for players to strategize against a Rogue.

Mind Blast gives Priests the ability to inflict a large amount of direct Face damage. We want to limit the amount of damage that Priests are able to deal from their hand, which will allow us to make cards that better emphasize their strengths in controlling the game.

Nine cards in total will be added to the Hall of Fame! This year is a bit different because the bulk of the cards are going to be ones from The Witchwood set.

Druids have always had excellent flexibility and a number of different tools when it comes to generating mana, cards, and minions, but have long struggled to remove their opponent’s large minions. Naturalize effectively nullifies that weakness, giving Druids a powerful option in matchups where card advantage doesn’t matter. Moving it into the Hall of Fame enforces the Druid’s weakness in removing large minions, maintaining its class identity.

As masters of Demons, Warlocks have long been a powerful board-control class. While we like that minion combat is as much a part of the Warlock’s identity as destructive magic, we want to acknowledge and embrace the class’s weaknesses when they lose control of the board. To that end, we want to limit the amount of damage a Warlock can deal from their hand. As a powerful Charge minion, Doomguard pushes against the Warlock class identity, so we are moving it into the Hall of Fame.

Over the past several years, we’ve seen a number of strong, aggressive Paladin decks. While we like Paladin’s identity as a minion-summoning and minion-buffing class with a fair amount of resource generation, card draw doesn’t also need to be one of the Paladin’s strengths. Divine Favor is one of the most cost-effective draw spells in the game, so to better emphasize other classes’ strengths and to provide better control over the power level of future aggressive Paladin decks, we are moving Divine Favor to the Hall of Fame.

Baku and Genn are powerful cards that have promoted new strategies since their introduction in the metagame. Those strategies have been more prevalent than we’d intended in Standard, and we felt that they might end up overshadowing what we’re going to introduce in the Year of the Dragon. In order for set rotation to breathe new life into Standard and maintain overall health of the ladder, we are rotating Baku and Genn into the Hall of Fame a year earlier than normal.

As they were complementary to the Even-Odd mechanic that Baku and Genn introduced, Gloom Stag, Black Cat, Glitter Moth, and Murkspark Eel will also join the Hall of Fame.

Past Additions to the Hall of Fame

We have currently had two different years of additions to the Hall of Fame. It will be interesting to see how these things start to shakeout in the future as they end up having to add more cards to the set to replace things they've removed. The Hall of Fame feels like a short-term fix, so we'll see if Blizzard has something else up their sleeve.

Year of the Raven Additions

In the second year of the Hall of Fame, Blizzard made another interesting little adjustment to the rules. They decided to move Molten Giant to the Hall of Fame, and revert the card to its previously un-nerfed status. This is a fun idea, and it might be nice if they continue this trend in the future with more cards.

Year of the Mammoth Additions

The Year of the Mammoth brought in the first additions to the Hall of Fame. This was big because it was a shake up in philosophy with the game, and in the past it was widely known that the Classic set would never be touched. This was deemed problematic, and Blizzard recognized it needed to make changes to its core card offering to significantly change up the meta.

While those were the featured cards to head to the Hall of Fame, there were some lesser used and known about cards that also got moved.  Captain's Parrot ,  Elite Tauren Chieftain ,  Gelbin Mekkatorque , and  Old Murk-Eye also got sent. These were cards that could either be earned by completing a hidden quest or were promotional cards in the past that could just be crafted with dust. The majority of the cards saw no play, but Old Murk-Eye was featured heavily in multiple Murloc based decks and was actually quite good.