Our Hearthstone Hall of Fame Dust Guide will walk you through everything you need to know to maximize the amount of dust you can get from the 2020 Standard Rotation! We'll go through how to handle if you own certain cards, and whether or not you need to craft them in golden or even craft them at all.

This is the best time of the year if you are a Hearthstone fan looking to cash in some dust. If you've been playing at all in the last year, then you'll be likely sitting on a pile of free arcane dust. Let's get into how you can do the most to profit and have the funds for crafting some future cards!

What's the Hall of Fame?

Let's start out with a brief look at what exactly is happening with the Standard rotation. Each year, Blizzard chooses some cards to be transitioned into the Hall of Fame set. This set is only playable in the Wild format, and the cards from it cannot be opened in packs anymore. In the past, they had focused specifically on cards from the Basic and Classic set, but in 2019 some cards from The Witchwood set were sent to the Hall of Fame as well.

The cards will move into the Hall of Fame once the first expansion of the year is released. We don't know yet what that is but we will update this guide once additional information is revealed.

Which Cards Are Headed to the Hall of Fame in 2020? 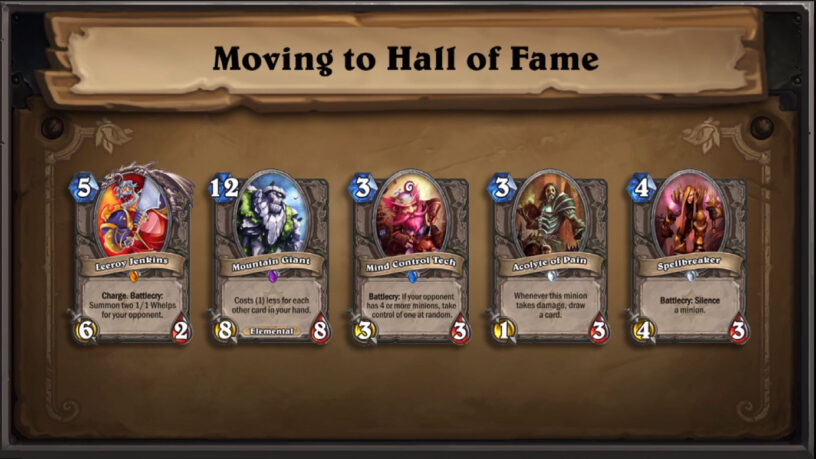 Five cards are headed into the Hall of Fame in 2020 and the Year of the Phoenix: Leeroy Jenkins, Mountain Giant, Mind Control Tech, Acolyte of Pain, and Spellbreaker!

A large batch of Priest cards are getting shuttled off into the Hall of Fame as well: Auchenai Soulpriest, Divine Spirit, Holy Fire, Shadowform, Northshire Cleric, and Prophet Velen. These are being replaced by the following cards:

What About My Cards?

So, you own some of those cards and they will no longer be playable in Standard. How is Blizzard compensating you? Well, for each of those cards you own, you'll be granted the full Arcane Dust value for each card (up to the maximum number that can be used in a deck). If you have different qualities of some of those cards (goldens), the golden cards will be applied first until you reach the max amount of playable copies.

This can be a bit confusing, so here's a small breakdown of what it all means:

How Do I Maximize My Hall of Fame Dust?

There's a bunch of different scenarios when it comes to maximizing your dust for the Hall of Fame rotation. I'm going to outline some different examples and explain why you would craft them in a certain way. The general rule for all of these cards is to wait as long as you can to craft them. It's better to open them in a pack, that way you don't have to spend any dust up front.

Here's a quick look at the crafting costs of cards and what you get when you disenchant them.

Craft all Commons in golden.

For every other rarity, you get the exact same dust back from a golden card that it costs to craft a normal version. For example, if you have a Golden Legendary and disenchant it, you get 1,600 dust back which is the cost of a normal Legendary. With Commons, this is not the case. Instead of the 40 dust it costs to craft a Common card, you get 50 dust back if you disenchant a Golden copy. That means, you will get +10 dust for each Golden Common you craft.

Don't own a card? Craft it in golden.

If you don't own a certain card, then it's best to craft it in golden. If you don't have enough dust to craft all the ones you don't own in golden, then craft the highest rarity for the most dust return. Keep in mind, you can hold onto the card and get it for free, or you can disenchant it and gain the additional dust.

If you don't own one of the golden Legendaries, here's how you will get dust:

Own maximum normal or golden copies? Do nothing.

If you already own one of the cards in either normal or golden then you don't have to do anything (unless it's a Common, see above). You will gain the same amount of dust back even if you upgrade the card to golden. This seems to trip people up the most, so check out the math below.

If you own one of the Legendaries, and don't care about getting it in gold. Here's how it works out:

If you do want to upgrade, then you can craft it in golden. You will, however, have some dust tied into the card. Instead of the 2,000 dust you would get back if you disenchanted both, you'll only get 400 back from disenchanting the normal version. You can get that extra 1,600 back whenever you want by disenchanting the golden copy, but it has been tied up into that card.

If you are missing some of the cards, don't craft them until the last minute if you can muster the courage. Not having to craft the cards will get you more dust, so wait if you can (especially if you are opening packs in the future). If you are a forgetful person, then maybe just craft what you need because you don't want to forget.