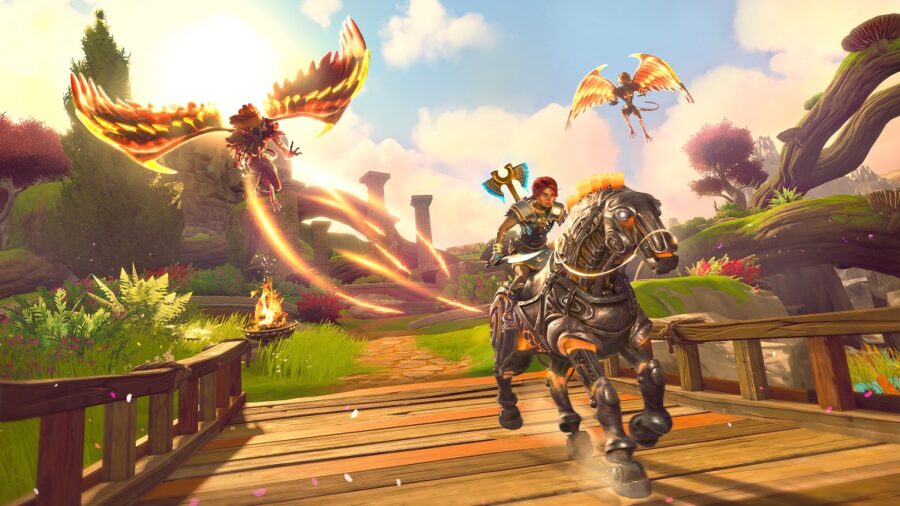 Most open-world games have a stamina gauge, which depletes when certain actions are done, such as running, climbing, and the like. Immortals Fenyx rising uses this system, which very much resembles Zelda: Breath of the Wild, which is not a bad thing!

To increase your maximum stamina in Immortals Fenyx Rising, you must first reach the Hall of the Gods. Once you are there, you can change Zeus's Lightning found by completing Vaults of Tartaros into more stamina.

The quest to reach the Hall of the Gods is aptly named Gods and Monsters, and it's a quest received not far into the game. Depending on how much you explore or the difficulty you are playing Immortals Fenyx Rising on, you can reach the quest in about two hours or less into the game, give or take.

When you reach the Hall of the Gods, here you can use a weightlifting bench, called the Bench of Zeus, and turn Zeus's Lightning into more maximum stamina. However, to acquire the first stamina upgrade, it takes four Zeus' Lightning, and it will increase your stamina gauge by one chunk. Of course, after the first increase, the amount needed will for the second one has been increased, and so on. The Hall of the Gods is also where you increase your maximum health too!

Zeus's Lightning can be acquired by completing Vaults of Tartaros, which appear on the map as tiny fiery craters. Complete the mini puzzle dungeon within, and you'll be awarded Zeus's Lightning. Once you have enough, bring it to the Bench of Zeus, and get "swol" like Zeus!

If you are having trouble locating Zeus's Lightning, use the ability called Farsight, which is used by pressing in the right thumbstick in, very much like Odins Sight from Assassin's Creed: Valhalla. This Farsight scans the area around you, so it's best to use this from a high vantage point, and you can tag objects on the horizon that will appear on your map for you to go and collect!

For more guides such as this one, like how to heal or how to tame a mount. We've got you covered!

Immortals Fenyx Rising: How to Save

Immortals Fenyx Rising: How To Heal