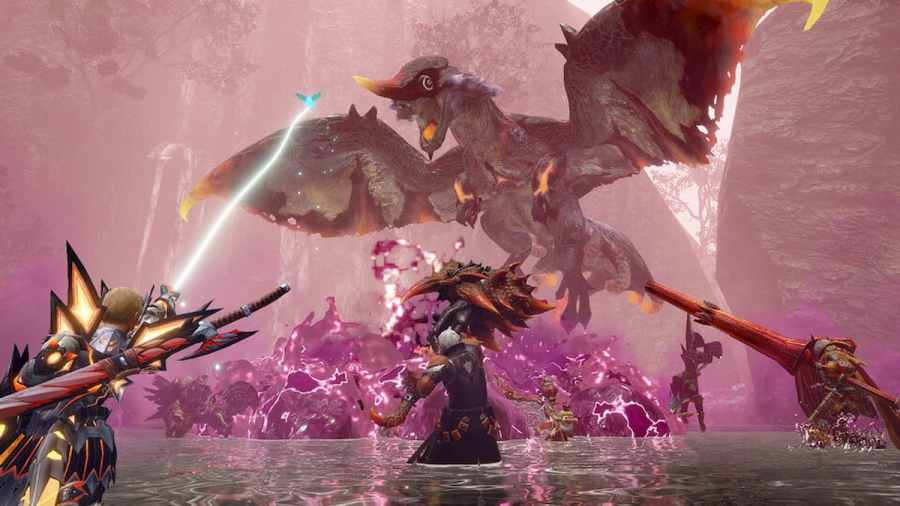 Risen Chameleos is a Chameleos that has overcome the Qurio virus and gained massive benefits for doing so. Like its standard counterpart, it focuses on using its tricky movement patterns and spitting deadly poison to overwhelm you. However, the Risen variant is considerably stronger, able to dish out more damage, more often. Fortunately, we have you covered. Here is a guide on the easiest way to defeat this toxic beast in Monster Hunter Rise: Sunbreak.

This hunt begins before setting foot into its ring. Like with a normal Chameleos, the risen variant uses a lot of poison attacks to wear you down before striking the final blow. Be sure to have as many Antidotes, Herbal Medicine, and Herbal Powder as you can. You'll want to carry in anything that can cure the poison status. We recommend carrying the materials to craft items into the hunt with you, just in case you run out. Going in without them is a surefire recipe for disaster, because unlike a normal Chameleos, Risen Chameleos uses noxious toxin that ticks 50% faster than normal poison. Not good.

You'll also want to ensure you're using a slashing or blunt Fire weapon against it. Fire is its elemental weakness and its head and forearms are its physical weak points. In addition, we highly recommend equipping armor and decorations that give you Poison Resistance. It's also recommended to eat for additional resistance to poison as well.

Risen Chameleos is still a Chameleos at heart, therefore, it is mostly dealt with in the same way. If you've faced a Chameleos before, which you should have by this point in the game, then you're already familiar with how it fights. It does have some slight changes to its moveset, but most of its new attacks are variants of the old. The key is to not be overwhelmed by its destructive poison. It uses poisons attacks often so be prepared to avoid toxic spit and poison clouds. Risen Chameleos maintains its invisibility gimmick, so be sure to watch for blindsiding poisonous attacks as well.

Where this Elder Dragon really differs from its standard version is the addition of its Risen State. As the fight progresses, it will enter this state, causing it to become even more dangerous. You'll know it has activated its Risen State when it roars, begins to glow, and has filled the area with a purple haze. This is when the fight gets serious, because its gains some completely new attacks that can easily catch you off guard. It will begin spitting large amounts of poison into the air letting gravity decide where it all lands, and attacking more aggressively using its invisibility more often than before.

Related: What is Qurious Crafting in MHR Sunbreak?

The key to dealing with the Risen State is pure aggression. Attack. Knock it off balance with blunt attacks to the head and feet. Focus fire its tail with severing attacks. Use flash pods to knock it out of the air when it flies. Do everything you possibly can to control it. Do not let it dictate the flow of the fight while in this state. Eventually, with enough attacks, Risen Chameleos will collapse to the ground, losing this state in the process and giving you and your fellow hunters a moment of free damage and respite. Even so, be warned that even after this occurs, it can enter the Risen State several times more throughout the fight.

For more Monster Hunter Rise, check out What are Dual Threats in MHR Sunbreak? on Pro Game Guides.

How to defeat Risen Chameleos in Monster Hunter Rise: Sunbreak