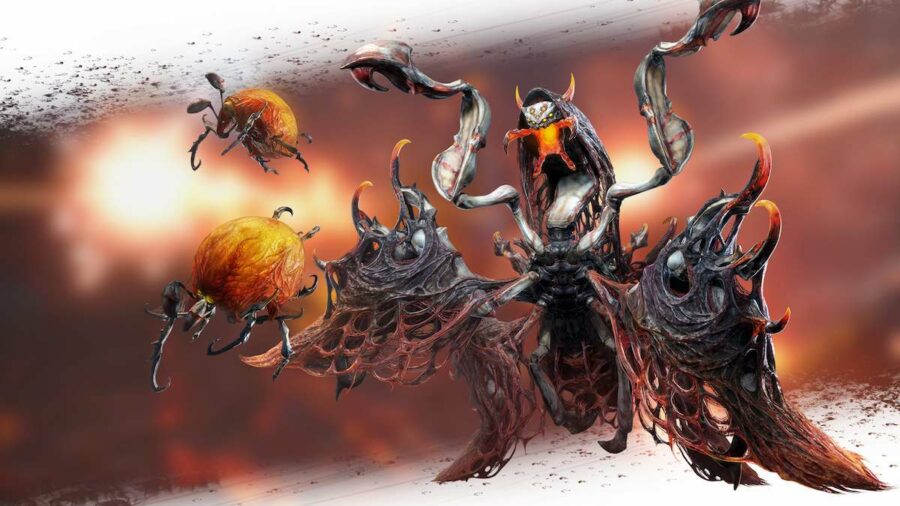 Monster Hunter Rise Sunbreak is the expansion for Monster Hunter Rise. It adds a considerable amount of monsters for you to take down and harvest for materials—turning them into weapons and armor. Rakna-Kadaki is a new monster in the series, and it's now even deadlier as the new type, called Pyre Rakna-Kadaki. Here are its weaknesses, resistances, and drops in MHR Sunbreak.

A subspecies of Rakna-Kadaki filled with explosive material, their bodies are covered in a dark red, explosion-resistant webbing. On offense, they strike their forelimbs like flints to induce explosions.

An advanced chain of command lets them direct their offspring with a special sound-producing organ. Connecting special detonation threads to offspring in the area lets them expand the explosive area to their positions.

You only have two options when taking on Pyre Rakna-Kadaki with an elemental weapon: Water and Ice (water being the better of the two). It is immune to every other element, including Fire, Thunder, and Dragon. If you are using Water or Ice, focus on the claws and head.

Blunt is the weapon to use when facing Pyre Rakna-Kadaki. Aim for its head, and you're golden. Cutting and Ammo weapons focus on the legs, and let blunt go to town to try to get that Stun.

Zero stars mean it is immune to that ailment, while three stars mean it's highly effective against that monster. Since Pyre Rakna-Kadaki uses blast-coated webbing and is a giant spider, it is immune to Blast damage and Poison. But it is pretty weak to stun, which is why hammer-wielders should focus on the head. Inflicting it with Waterblight, using a Mudbeetle is always a plus.

There are numerous ways to get monster parts, but it all revolves heavily around a percentage system, which is ultimately RNG. You may get a rare item or none at all.

For picking up the monster drops, you can obtain the following: Pyre-Kadaki Cortex 50%, Pyre-Kakaki Silk 40%, Pyre-Kadaki Spike 10%, and Queen Substance 50%.