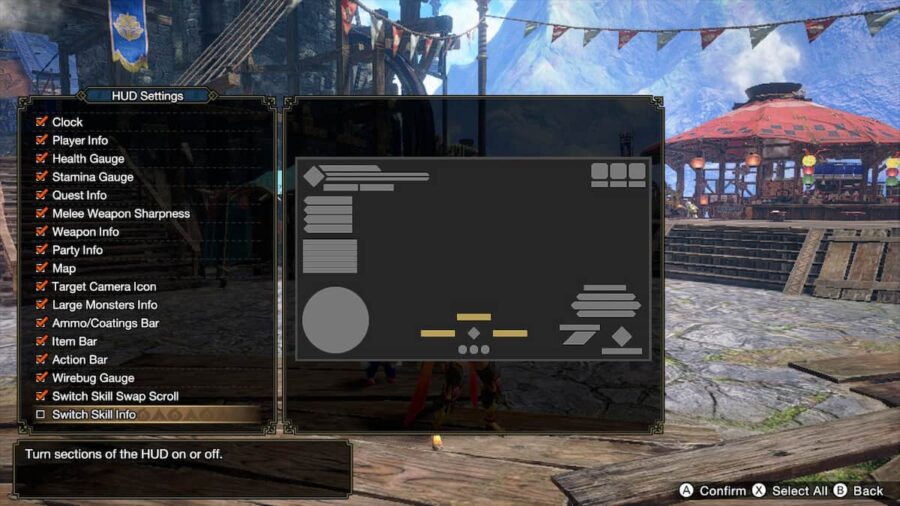 Players are able to switch their Switch Skills in combat for the first time in Monster Hunter Rise. The Sunbreak expansion adds many quality-of-life improvements, and the Switch Skill mechanic lets players equip multiple Skills at a time. The HUD, or Heads Up Display, shows the details of the equipped Switch Skill but may not be what players want to see all the time. This is how to remove the Switch Skill hover text in MHR Sunbreak.

How to turn off Switch Skill Info in MHR

Players just have to go into their menu and go all the way to the right. Under the System section of the menu, players then have to go to Options. The HUD Settings will be in the first option, Game Settings, and will allow players to turn off any sections of the HUD that they want. The Switch Skill Info shows the details of the equipped Switch Skill and can be unticked to turn it off.

Related: How to fix ‘crash on startup’ error in Monster Hunter Rise Sunbreak

The Switch Skill Swap Scroll displays either the Red or Blue Scroll that players have equipped. This is a relatively small icon that appears on the bottom center of the screen but can be distracting for some players who are not used to it being there. Ultimately, it is up to the individuals who feel comfortable with their equipped Switch Skills or don't have any difference between their equipped Scrolls.

How to change Switch Skill loadouts

For more Monster Hunter Rise guides, check out What is Buddy Recon in MHR Sunbreak? – How to use it on Pro Game Guides.