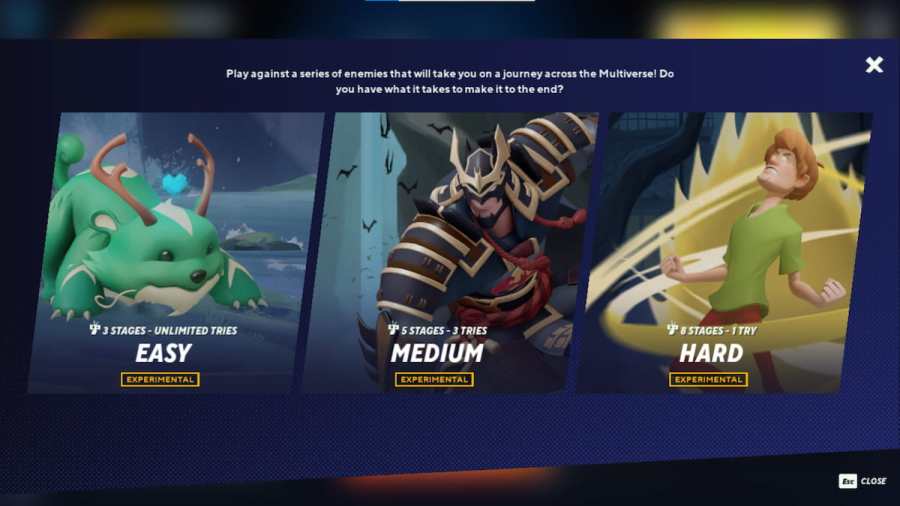 MultiVersus has introduced the first single-player content outside tutorials and the lab. The Classic Arcade mode is this game's answer to both Classic mode in games like Smash Bros. and arcade ladders in other fighting games. It's a simple system that could develop new features as the game progresses.

What is MultiVersus Classic Arcade Mode?

This game mode can be selected from the main menu, right underneath Advanced Tutorials and The Lab. Players can enjoy it by themselves or with a friend in co-op. There are three difficulty settings to choose from, increasing the number of matches and decreasing your chances to succeed.

Medium and Hard modes will include special matches. Question marks on the Arcade screen will match the player against Variants, which are versions of other characters in fancy skins. This gives the player a chance to check out a bunch of other skins that online players might not have.

Arcade ladders feature Rivals, which are specific mortal enemies of the character you selected. For example, if you selected the newest character Black Adam, you'd be matched up against Superman for the Rival bout. Rivals are almost always decked out in premium skins. The final match of an Arcade run will feature one or more powerful buffs. They could have armor that absorbs a couple of hits, deal increased damage, or grow to enormous sizes.

For players with a lot of experience, only the Hard mode will pose a substantial threat. The NPC's skill in combat is limited, but the consistent buffs in later matches make them much more deadly.

Players can earn in-game rewards for playing Arcade mode, but they will be familiar to dedicated players. Arcade mode pays out rewards in much the same way as online matches. After a successful Arcade run, players will earn experience towards their season pass, progress towards any daily or weekly challenges, and experience towards the character they chose. This makes a Hard mode run of the Arcade ladder one of the best ways to quickly unlock a character's Perks.