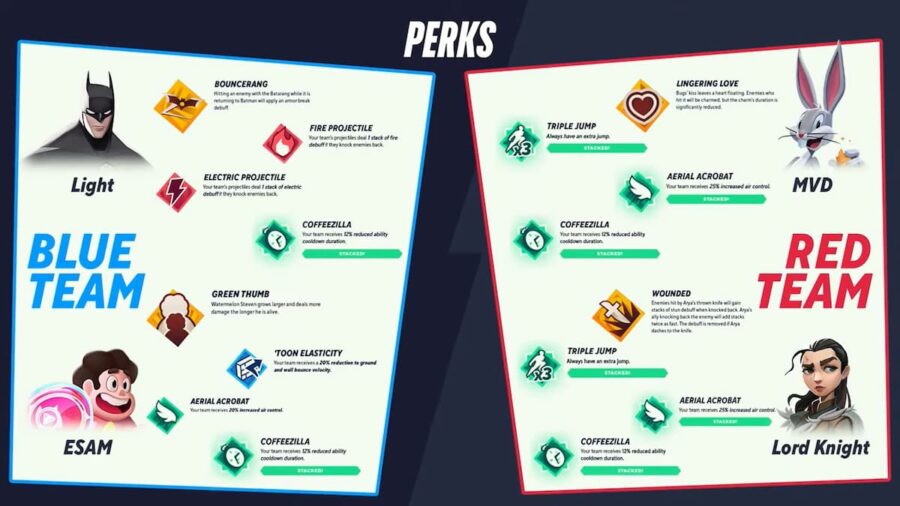 MultiVersus is Warner Bros. and Player First Games' platform fighter that uses characters from various Warner Bros. franchises. Each fighter has a certain playstyle, but they can be altered using Perks. This may leave you wondering what Perks are in MultiVersus.

Note: This guide was written using the closed alpha and Pro Player Showcase, so this information may change or be expanded on when MultiVersus releases.

Each character can equip four perks. Perks have different categories like Offense, Defense, or Utility. These can alter the character's stats and abilities, making them play differently. Some Perks are exclusive to characters, too. Perks also stack with your teammates, so you can double up on strong Perks. Here are all Perks in MultiVersus.

While MultiVersus is not fully released, some Perks already seem to have found their place as the best Perks in MultiVersus. Here are our recommendations for the best MultiVersus Perks.

These all provide either boost to movement or cooldown reduction for abilities. Having more options for moving around the stage is always a huge bonus in platform fighters. As each fighter has special abilities that may have cooldowns, reducing this allows you to use your abilities more often. Combine this with competent play, and you can control the fight.

For more informaiton on MultiVersus, check out Smash Bros. Ultimate Pros Light, ESAM, MVD, and more join MultiVersus and What is the release date of MultiVersus? on Pro Game Guides.

All Perks in MultiVersus, explained