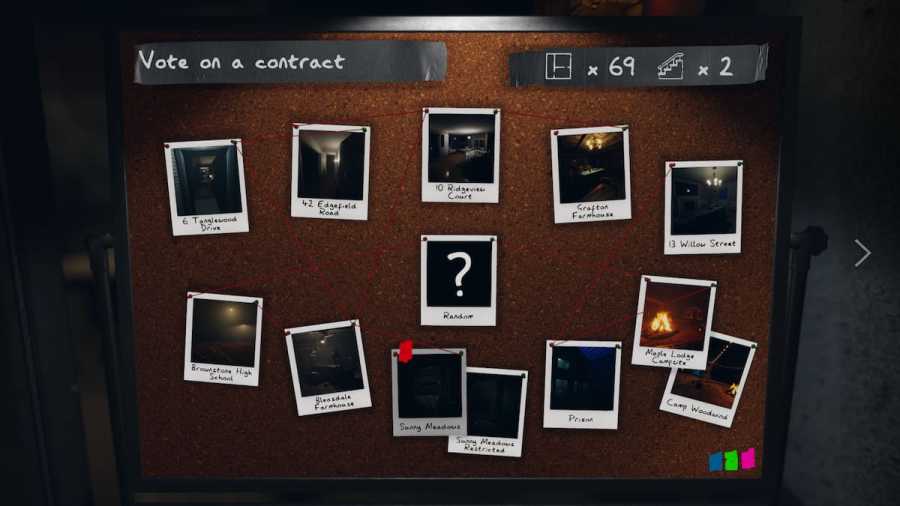 The Sunny Meadows Mental Institution map in Phasmophobia hides some secrets for players that are invested in the lore of the game or just want to show off some environmental features. One can be found on the Restricted version of the map, while the rest will have to be discovered on the full version. Players will have to make use of the Custom Difficulty modifiers as Cursed Possessions play a big part of one of the Easter Eggs. These are all the Easter Eggs in Sunny Meadows Mental Institution in Phasmophobia.

To find this Easter Egg, players will have to play on a Custom Difficulty for the map. All six Cursed Possessions must spawn on the map. Upon entering the Institution, straight down the hall are two entrances to the chapel. Inside, players will find all the Cursed Possessions in a circle. By lighting the candles of the Summoning Circle, the crosses on the wall will turn upside down. Once players light all the candles and summon the Ghost, the large cross in the center will burst into flames.

Related: All hiding spots for Camp Woodwind in Phasmophobia

Patient 07 is a Ghost model in the game that can be recognized by a unique barcode near their chest. They tend to walk backwards at players during Ghost Events and Hunts, entirely upside down. Before Sunny Meadows was released, the previous Asylum map had many Easter Eggs alluding to the patient transferring over to another Institution.

When entering Sunny Meadows, players can go to the left past the desk to go downstairs and to the left again until they reach a padded cell. Using a UV, either from the UV Flashlight or Glowstick, players can see tally marks to show just how long Patient 07 was in the cell.

Continuing down the hallway, players will reach the morgue and find a corpse laying on a table. This corpse is none other than Patient 07 and can be confirmed by looking at the face of the model. This is where their story ends and players finally have answers as to what happened to this character in Phasmophobia.

All Easter Eggs in Sunny Meadows in Phasmophobia