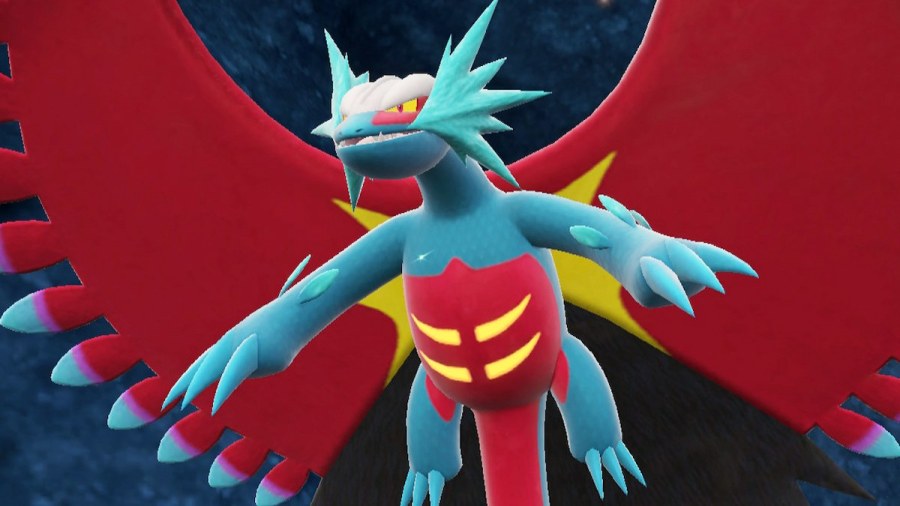 Roaring Moon is one of the rarest spawns in Pokémon Scarlet and Violet and can only be found in one spot on the map. To catch Paradox Salamence, you have to find a hidden cave that is easy to miss if you don't know where to look.

How to get the Roaring Moon Pokémon in Pokémon Scarlet & Violet

Paradox Pokémon, like Roaring Moon, aren't available until you have first completed the Victory Road, Starfall Street, and Path of Legends campaigns. After defeating all three storylines, you will unlock a fourth and final campaign that takes you to the Great Crater of Paldea. Once the game's credits have rolled, you will then be able to revisit the crater to catch any Paradox Pokémon you might have missed including the incredibly powerful Roaring Moon.

Related: Where to find Dunsparce in Pokémon Scarlet & Violet

Roaring Moon only spawns in Area Zero in the Great Crater of Paldea. The quickest way to reach the ancient Pokémon is to fast travel to Zero Gate, which is located just south of West Province (Area Three) on the Pokémon Scarlet and Violet map. Once there, head inside the facility and stand on top of the green portal in the center of the room. When prompted, select Research Station No. 3. You will now need to find a hidden cave location outside the lab that is explained below.

Exit Research Station No. 3 and immediately travel North until you ride under a giant stone bridge overpass. If you continue to hug the left side of the wall you will eventually run into a tree. Pan your camera to the left of the tree to reveal a hidden cave that is tucked between several rocks on the mountainside. Enter the cave to find a massive den with a waterfall, which spawns Roaring Moon. Because it's a rare spawn you may need to run in and out of the cave several times until the giant Dragon appears. Roaring Moon can be found at level 57, so prepare for a tough fight in order to catch the Paradox Salamence.

For more information on Pokémon Scarlet and Violet, check out How to find Greavard and evolve it into Houndstone here on Pro Game Guides.

Where to catch Roaring Moon in Pokémon Scarlet & Violet