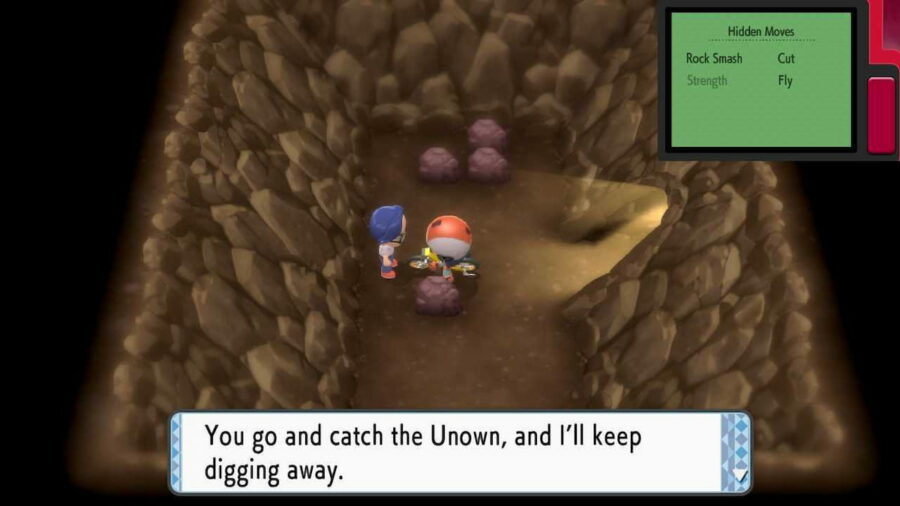 The Ruin Maniac is a digger you find in cave along Route 214. He will ask you to race with him to see who can finish their duty first: him digging or you catching Unown.

However, one common problem trainers face at this stage is showing him the Unown after they have captured one, as it seems his dialogue doesn’t change.

How to catch Unown in Pokémon Brilliant Diamond and Shining Pearl

If you don’t have Unown yet, you can catch them in the Solaceon Ruins. Fly to Solaceon Town, move northeast, and hop down the furthest ledges from the settlement. Unowns are the only Pokémon that spawn in it.

How to show the Ruin Maniac your Unown

Here’s the thing: you don’t actually need to show the Ruin Maniac your Unown. The “race” he’s asking for is to see if he can dig faster than you can catch the 26 Unown forms/letters in the Solaceon Ruins. The more you catch, the further he will get into his dig.

The cave will eventually extend to an area officially called the Maniac Tunnel. Wild Pokémon will spawn in it, and it’ll connect with the Solaceon Ruins when he’s done. The Maniac Tunnel is also the only place where Hippopotas can be found outside of the Grand Underground.

What reward do I get by completing the Ruin Maniac race?

If you catch all 26 Unown letters in the Solaceon Ruins, the Ruin Maniac will hit an area where the last two Unown forms (the question mark and exclamation point) spawn. But that’s it—no items rewards will be given.