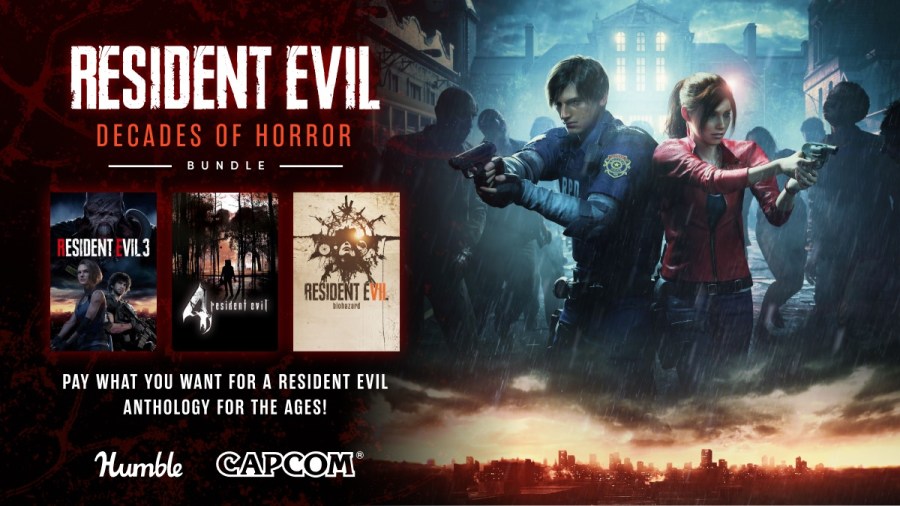 This article is written in partnership with Humble Bundle

Resident Evil is one of the most influential franchises in gaming. Even those who haven’t played a single installment in Capcom’s long-running series likely know the name. These players now have the chance to jump into the entire collection, as Capcom has partnered up with Humble Bundle to offer 11 different legacy titles for as low as $1.

In celebration of Capcom’s deadly series and to help support the NARAL Pro-Choice America Foundation, Humble Bundle is compiling almost all of the main series entries into one package. Take a trip back to the beginnings at the Spencer Mansion, travel the depths of the Raccoon City Police Department, and skulk around the dilapidated estate of the Baker House in this ultimate Resident Evil bundle.

Start things off with the intense prequel, Resident Evil 0, before working your way through the critically acclaimed HD remaster of the original title. From there, you’ll find the recent remakes of both Resident Evil 2 and 3, as well as the Ultimate HD port of Resident Evil 4. Firmly in the modern era, you’ll have access to Resident Evil 5, 6, and 7, as well as spin-off games Revelations and Revelations 2.

Alongside these games, Humble is including a 50% off coupon for Resident Evil Village just in time for the release of its upcoming Winter’s Expansion DLC pack. Proceeds from the sales of this bundle will help support the NARAL Pro-Choice America Foundation, letting you help charity while getting some games to add to your collection.

The bundle will only be available for the next week, so make sure to jump on it now! You can get the Humble Bundle here.