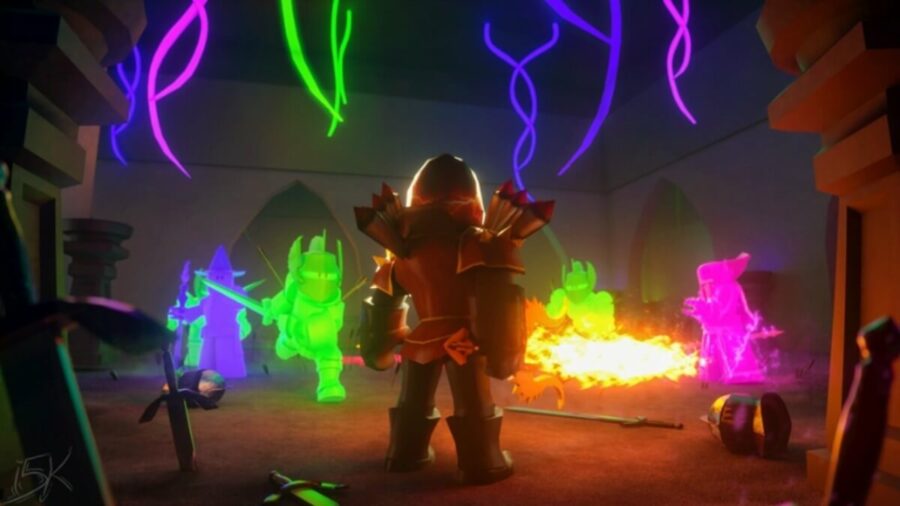 AJ Striker has crash landed in Treasure Quest for the fourth and final week of Metaverse Champions. In order to get Crate Drop #4 (available May 5 to May 14), you must defeat the Monolith Boss. We managed to complete this challenge at Level 1 using nothing but a Wooden Sword, so it is 100% possible solo.

Assuming you're ready for the fight, start it up in-game by pressing Play and choosing the Monolith Boss option. Choose Medium, aka the easiest difficulty, because you will still earn the Crate Drop and the badge. When you're ready, launch the fight and begin.

If you're feeling bold like we were, immediately run up to the Monolith Boss and wail at him. Despite his many laser attacks, just keep hitting him until he's dead. He will continue to hurt you as you strike him, but you should be able to knock all of his health to zero before he kills you. You're also given four lives to kill the Monolith Boss, so spam attack on him and don't stop until the fight is over.

Related: How to get the Elemental Blade in Roblox Treasure Quest

For the more traditional approach, the Monolith Boss has a handful of moves at his disposal. He will shoot large walls of green lasers and also lasers that shoot from his eyes. Meanwhile, dozens of minions will run toward you as the Monolith Boss launches those attacks. Stay moving at all costs or else you will quickly become trapped by the minions or the Monolith Boss. As soon as you find an opening, attack the boss. Rinse and repeat.

If our first approach doesn't work for you, don't worry. This can be a challenging fight, especially for high level players because the monolith boss scales to your level with more health. In that case, the next best way to defeat this boss is to team up with friends and/or hop into a server where high-level players are willing to help. It's no use attempting the Monolith Boss if you're having too much trouble defeating him alone.

After you have beaten the Monolith Boss, you will be awarded a game badge and AJ Striker's Crate Drop #4, which will also appear in your Avatar Inventory.

Where is the Traveling Merchant in Roblox All Star Tower Defense?

How to appear offline on Roblox