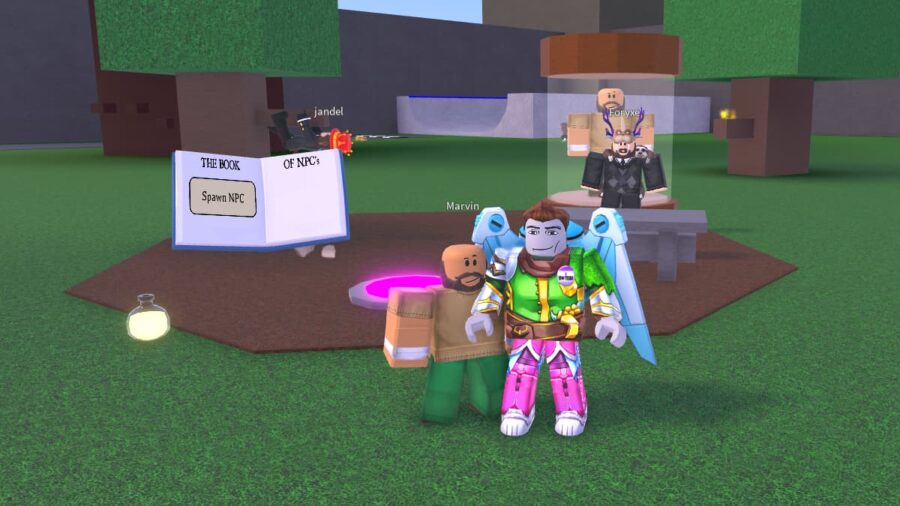 Players can spawn their very own NPC companion in Roblox Wacky Wizards. This NPC's name is Marvin, and while he may be the player's dedicated test dummy, he is a loyal friend who will drink any and all potions thrown his way. If that's not friendship, then what is?

Wacky Wizards creators Foryxe and Jandel set up their own Marvin NPC station in the overworld, and this is exactly where you can get Marvin free of charge. The NPC station is not too far from the cauldron area. More specifically, players can find it near the large tree obby where the bird ingredient is obtained.

After stumbling upon the station, approach Foryxe and Jandel's Book of NPCs. Press the Spawn button on the book and watch as Marvin rises from the creation platform. Marvin will greet the player and follow them around wherever they journey.

Players can feed Marvin any potion the player brews. While it is silly to watch Marvin's reactions to the potions, this also comes in handy for the player if they are unsure of any effects of a new potion. Feeding the potion to Marvin first ensures the player's safety, preventing them from pressing the Reset Player button every couple of seconds.

Only one Marvin NPC can be spawned at any given time. Although Marvin is great as a new NPC companion and test subject, this is likely just scratching the surface of Marvin's capabilities. Who knows, maybe Foryxe and Jandel will allow players to spawn an entire army of Marvins!