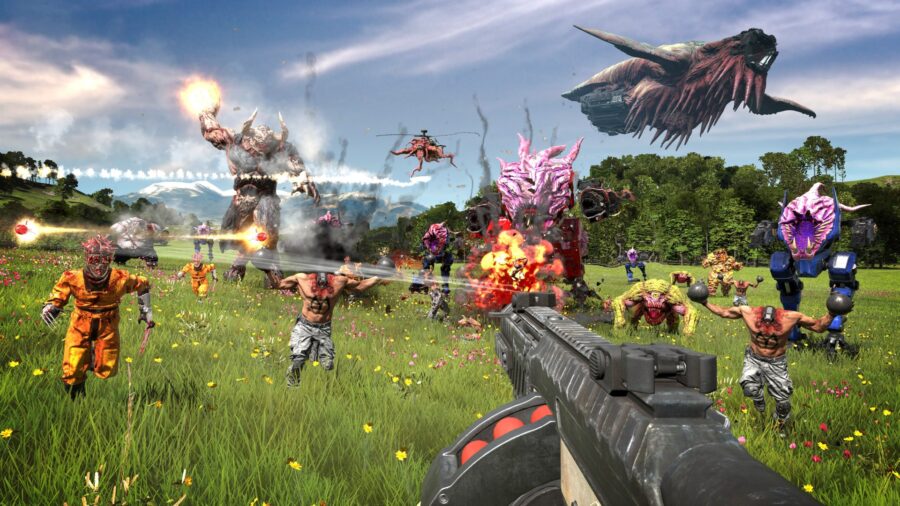 Serious Sam 4 is finally out; the fast-paced FPS  is here! Many people have been waiting for the next Serious Sam title, as the last game was released in 2017. There have always been secrets throughout the Serious Sam franchise, which have been important to your survival, especially on the higher level difficulties.

However, most secrets are hidden pretty well, and most involve platforming in some form or another. The secret goodies can range from ammo, armor, health plus much more, oh, and extra points at the end of the level.

So here's a guide on how to find all the secrets in level 1 Death From Above in Serious Sam 4!

Death From Above Secret #1

The first secret straight off the bat is a Rocket Launcher, which is awesome! To find it head inside the tunnel as you spawn, and keep following the path to the right until you find a sandbag barricade. Take a left and follow the corridor; you'll soon come across a broken large cabinet next to a burning barrel. Look behind this cabinet, and the Rocket Launcher shall be yours!

Death From Above Secret #2

Continue through the level until you come across an open area filled with pillars. From here, head to the right and behind a large bush, you'll find a small stone step in the corner. Jump onto the step, then jump to the platform to your left, so the left of the screen is facing the wall.

Death From Above Secret #3

From that secret, keep going through the level until you can see a square wire gate on your right-hand side. Carry on and take the second turn to the right, and you'll come across a massive bush. Go through the bush, and you'll find some Secret Armor!

Death From Above Secret #4

Carry on through the level until your waypoint is about 715m away from you. You'll head through a mini archway after you exit,  look to your right, and you'll see an area that you can climb up. Continue until you can climb up a mini set of stairs and hug the wall right to your right until you come to once again another bush. Behind the bush is a gap in the wall that you can fit through. Then hug the wall to your left, and until you go into a mini archway to find the Secret Armor.

Death From Above Secret #5

Go back to where you previously climbed up to this area, and carry on through the mission and enter the upcoming house. Go through the house and exit; on your right should be a beat-up white car. Carry on down that right path and follow it to find a Secret Depot and some Shotgun shells.

Death From Above Secret #6

Start following the waypoint until you can see a yellow truck and a white van in front of it. Jump onto the white van and then onto the truck. Here you'll find some Secret Armor.

Death From Above Secret #7

From here, you'll see the waypoint is telling you to go to your left. Ignore this and continue going forward towards the bust-up cars against a wall. In the corner of this wall, you'll see a car and a large bush behind it. Go through the bush and look to your right, you'll find a Secret Depot.

Death From Above Secret #8

Follow the waypoint through the path to the left and keep to the left, and eventually, you'll come across a bridge. After you cross the bridge, you should come to a metal gate with a sign with a cow on it, saying, "Attention, Secret Project Area, No Visitors." Shoot the sign, and a message will appear saying, "The Secret Cow King has been disturbed by your disrespect!!

Now, if you look behind you onto the bridge, you'll see a massive beast heading your way; this is the secret boss of Death From Above level 1!

If you are struggling to find any of these, check out this video for reference: