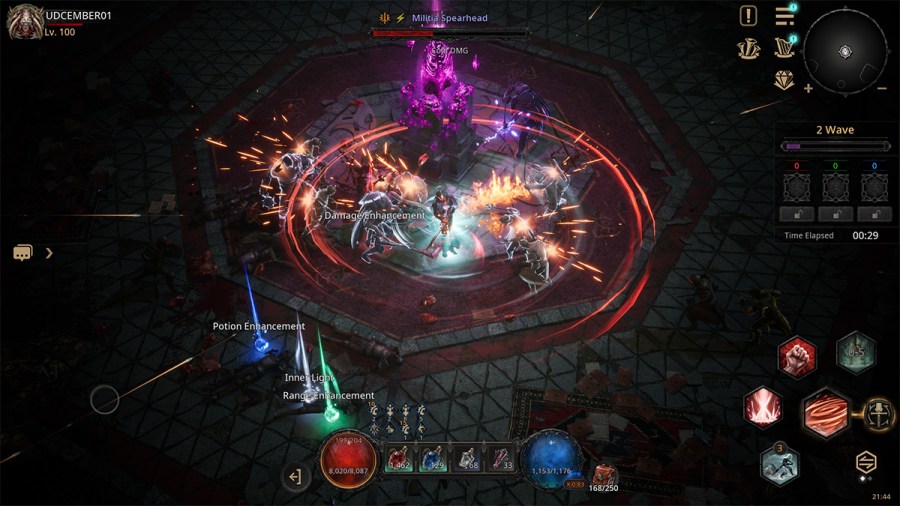 ARPGs might be a crowded market on mobile platforms, but LINE Games' recently released UNDECEMBER offers a unique twist to the fold: complete class freedom. Typical character progression in other titles will have you selecting a starting class and sticking with a strict path of progression. UNDECEMBER bucks that trend by allowing players to determine their own destinies.

As soon as you complete the tutorial, you're permitted to use a variety of weapons. There are melee and ranged options, so it's easy to find something you'll enjoy. Plus, if you feel like trying out a different weapon, there's no hassle.

Even skill points in UNDECEMBER work differently than in other games. Your intelligence stat still contributes to your overall mana, but leveling up strength will increase the power of your magic spells. Intelligence, on the flip side, also gives an overall increase to your ability to dodge incoming attacks. Players can feel encouraged and rewarded for maxing out all of their stats instead of focusing only on one or two.

This is made possible by the Zodiac system, a grid of constellations in which players can focus on what tickles their fancy. You can upgrade three basic stats: strength, intelligence, and dexterity. You can upgrade each stat up to 10 times, and then you'll start earning Zodiac tokens to be spent on more specialized skills.

Don't mistake these three basic stat trees as the end-all-be-all. The specialized skills are great for deciding how you want to play the game. Opt into attack speed and damage if you're looking for melee combat or accuracy and speed for the more elusive types. We really like that UNDECEMBER lets the player reset their stats, in case you want to change things up.

Along your journey, you'll collect Runes you can place on the grid (seen below). These runes hold the techniques for different attacks and abilities throughout the game. This means you won't always unlock techniques at set intervals and will find them throughout your playthrough.

With three different colors of runes, each representing a different type of ability, you can mix and match to create specific skill sets for each situation. While playing with this system, we appreciated the little bonuses awarded for certain alignments. For example, matching several red runes in a row, or multiple greens in a row.

With an understanding of the combat system out of the way, there's so much plot and narrative to cover. Although the whole campaign isn't available in the early access, the available acts show tons of promise. There will be 10 acts, ensuring a huge amount of content.

All of UNDECEMBER’s cutscenes and NPC interactions are fully voiced, adding a layer of immersion to its bleak game world. You’ll find yourself being a hero of the people, helping out those who are down on their luck or in serious danger.  Your travels will lead you through the plot of the game as well, through hints and discoveries like diaries that share just a bit of knowledge at a time.

Cooperative play is also a key feature of UNDECEMBER. With crossplay supported across all platforms, you’ll have no trouble getting your friends to join you for some dungeon-crawling action. Team up, tackle stronger foes and deadly bosses, and uncover hidden encounters in dungeons that will grant you extra powerful loot.

It feels great to have crossover between the unique and expansive combat system and the lore-rich characters: meet with NPCs to upgrade items, weapons, Runes, and more. We've come across many games that force you into either "plot" or "combat" sections of the game, and UNDECEMBER is not one of them. We find a great balance and flow between the two and love how LINE Games tackled this.

This system allows players to stick with weapons they know work for them, not to mention it cuts down on the monotony of swapping to newly acquired gear that is 1% better. You won't need to constantly shuffle your equipment around, letting you focus more on combat and exploration. Even if you find an item you want to swap over completely, you can break down your old ones and use their upgrades again.

Altogether, LINE Games crushed it with UNDECEMBER. The game truly rewards players for creativity, exploration, and planning through the extremely customizable character and weapon trees. These tweaks to the ARPG format are powerful and help it stand out to us as a great (free-to-play) game. You can play the game for free on Steam, IOS, and Google Play.