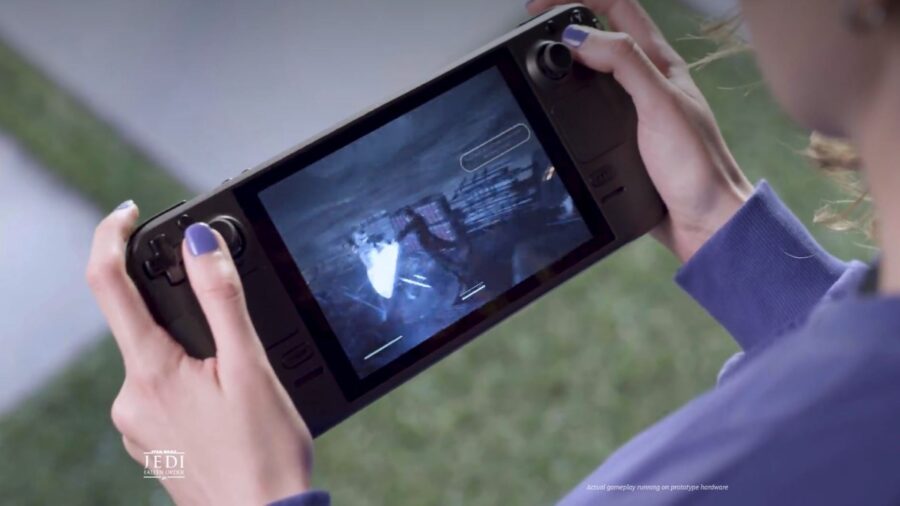 Valve announced their answer to the Nintendo Switch with the Steam Deck. This alternative option for portable game fans allows players to take their PC's Steam library with them wherever they wish. It's a portable PC with all the functions of a regular computer. As with any computer, there are different specs and variations available.

There are three variations of the Steam Deck available when the system launches in December of 2021. Each comes with its own features and benefits. It's important to understand the differences between each version of the Steam Deck before making a purchase.

The three versions of the Steam Deck are listed below, along with any bonuses included with purchase:

This model is the cheapest option of the three but houses the fewest features. This includes a modest 64 GB of storage. It's also the only version of the Steam Deck that uses the slower eMMC.

Its eMMC is still a competent option but far less responsive than an NVMe would be. This means that the operating system will be substantially slower than its counterparts. With that being said, this 64 GB model is still a solid entry point for those who don’t mind a slower operating system and want to save some money. It’s the perfect model for those simply interested in taking their PC library on the go without all the added bells and whistles of the more expensive models. Smaller games like Hollow Knight, Hades, Stardew Valley, and Golf With Your Friends will fit on this system with ease. Just remember that larger games like Doom Eternal will likely need a storage upgrade if users want to download them.

Those looking for a more powerful variant of the Steam Deck should check out the other models. They are pricier, but their features reflect the price tag.

The second model is the first to feature the NVMe SSD, a favorable choice for those interested in a quicker operating system. It also comes with a Steam Community profile bundle that highlights which version of the Steam Deck consumers purchased. This bundle is perfect for those looking to get the improved speed offered by the NVMe SSD. The base storage is also heftier, beginning at 256 GB, perfect for those who like a quick interface and playing beefier games like Forza Horizon, Jedi Fallen Order, or Battlefield without the need for an added microSD card.

The final model is for the most dedicated PC players. Anyone looking for the best version of the product and willing to foot the bill for its hefty price tag will get the most impressive version of this mobile computer.

The most obvious change in this model is the 512 GB of internal storage. This allows for a substantial amount of space games, applications, and programs. Even gaming goliaths like Call of Duty: Black Ops Cold War will fit on this portable behemoth. It also uses the NVMe SSD for faster processing as opposed to the base model. Another change exclusive to this version of the Steam Deck is its Premium anti-glare etched glass. This screen material is designed to prevent light from glaring and obstructing the view in illuminated areas. This model also comes with a unique carrying case and Steam Community banners that showcase players adopting purchasing the most lucrative version of the Steam Deck.

There will also be a dock that allows users to connect their Steam Deck to an external display. More details on this accessory are sure to come soon, but Valve hasn't disclosed a price or release date for this product just yet.

Related: When does the Steam Deck Release?

If storage is a concern, users can rest easy. Each model also comes with a microSD card slot that allows users to increase storage capacity at their discretion. This will add to the console's base storage, and consumers can swap microSD cards at the user's discretion.

Interested parties can preorder a Steam Deck if they have a Steam account with linked payment information on the Official Steam Deck page. Only one console can be pre-ordered per account, and once a model is selected, they cannot swap their preorder. There is a silver lining, though. Users can pay off their preorders at their own pace. A $5 deposit is needed to reserve a Steam Deck, but any payment between the initial deposit and the order availability is up to those with a pre-order.

Steam and Valve are keeping consumers as informed as possible on their social media channels, posting updates regularly regarding the Steam Deck. Check out the Tweet below from Steam for more information on the Steam Deck and a direct link to the product's website:

The Steam Deck has already seen substantial consumer interest and is constantly in and out of stock on the Steam Deck pre-purchase page. This is due to scalpers buying up stock and posting the listings on eBay for exorbitant prices. Thankfully eBay has decided to take action against these users and has removed many pages for violating presale policy. It's a significant step in combatting the exploitative scalping market that has plagued gaming since the PlayStation 5 and Xbox Series X|S launched in late 2020. When it initially opened pre-purchases, buyers were promised delivery by Q1 2022, but estimates have started to vary because of the demand. Many users are reporting that their orders promise a Q2 2022 delivery at the earliest.

When does the Steam Deck Release?

Does the Steam Deck have a touch screen?

How much will the Steam Deck cost?