Are Sharks in New Horizon?

Yes, there's four sharks in total currently that you can catch during certain months of the year. These are the Saw, Hammerhead, Great White, and even the Whale Shark! Believe it or not, these large fish will fit in your pocket once you catch them.

How to Catch a Shark in New Horizons

Catching a shark in the game is really no different than catching any other fish. However, there's a distinct shadow that a shark makes that will distinguish it between any others. They all spawn in the ocean, so take a run around and look for the following shadow: 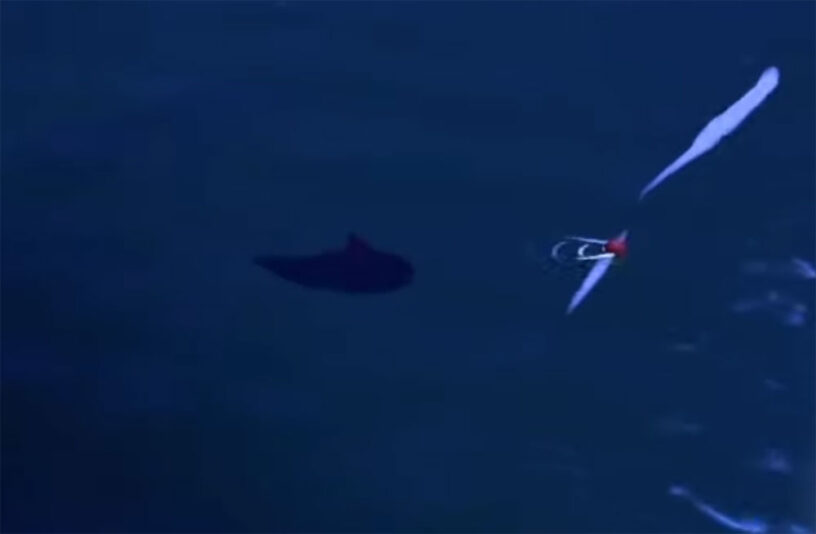 Once you find one of those, then just go ahead and fish for it as normal and you will hopefully have yourself a shark! There's two other fish that will sometimes come out of the water from this shadow. These are the Ocean Sunfish and the unfortunate Suckerfish. The Suckerfish is going to be far more common, so you'll just have to hope you end up with one of the larger fish to get more money!

Here's a look at all of the sharks you can catch in the game! Remember to keep an eye on the season, they can generally be found in summer months.

You can't craft a hammer in New Horizons, but maybe you could utilize this big fish as one!

One of the most fearsome fish in the sea is available to be caught! The Great White Shark sells for the most bells out of any of the other options, so this is the one you're looking to catch if you are hoping to farm some bells.

You can find Whale Sharks in any of the ocean surrounding your island. These are the biggest fish in the sea in real life, so getting to catch one and put it in your pocket is pretty impressive!

If you want to catch sharks now and aren't in the right timeframe, you can always do a bit of a cheat to change the time in your game! Check out our Animal Crossing: New Horizons Cheats guide for more details.

If you do a lot of traveling via Dodo Airlines, you will come across a lot of different island types. One of those island possibilities will be one that can feature a bunch of sharks in the sea! If you get this one, make sure to stock up on as many of these big fish as you possibly can!

How to get Brewster and The Roost café in Animal Crossing: New Horizons

How to get every vegetable in Animal Crossing: New Horizons