Our Apex Legends Character List Guide will walk you through all of the available characters you can choose from when gearing up to go to battle! We've got a full list of the characters, and will be detailing their strengths and weaknesses once they are available.

Repawn Entertainment, the team behind Titanfall, are revealing their new free-to-play battle royale game today! We don't know much at the moment, but we will be covering all there is to know about this new game. You can learn more as we do by checking out their livestream on Twitch!

The list of characters in Apex Legends were leaked a bit early prior to the live stream. It appears that there are currently eight different characters to choose from, and each of them will have their own specialty. You can see in the top right of each option an icon displaying their potential usage. Shield is more of a bulky tank, the plus sign is a medic or support class, the bullets will be a standard soldier, and the radar icon is a tracker. I would expect more characters in the future. 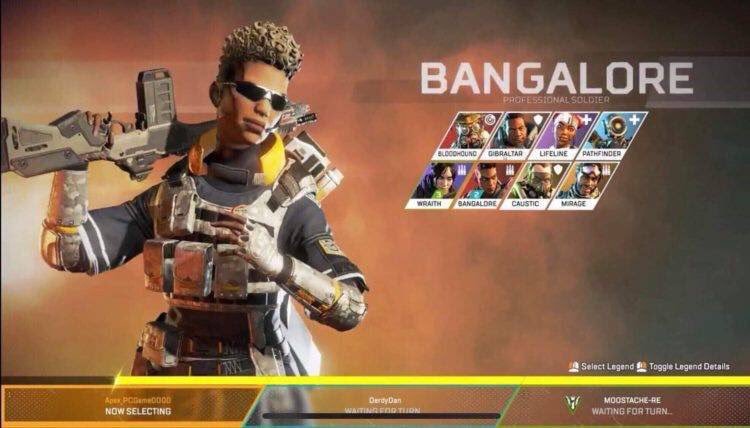 Some official information on the characters has been released:

Born into a military family where she, her parents, and her four older brothers all served in the IMC Armed Forces, Bangalore has been an exceptional soldier since she was young. She was top of her class at the IMC Military Academy and the only cadet who could take apart a Peacekeeper, equip it with a Precision Choke hop-up, and put it back together in under twenty seconds – blindfolded.

Bloodhound is known across the Outlands as one of the greatest game hunters the Frontier has ever seen – and that’s about all anyone knows. Their identity is a mystery wrapped in layers of rumors: they are fabulously wealthy, a bloodthirsty murderer, a Goliath whisperer, a former slave, half bat, and a dozen other things depending on who’s doing the whispering.

Learn more about this class with our Bloodhound Guide!

Before there was Caustic, a scientist named Alexander Nox worked at Humbert Labs, the Frontier’s leading manufacturer of pesticide gases. With a glut of pesticides needed to protect the growing Frontier colonies’ crops, Humbert Labs was constantly on the hunt for better and stronger formulas. Nox was one of their brightest scientists and worked day and night developing new gases. But to make sure they worked, he needed to test them on more than just inert tissue: he needed something living.

Gibraltar is a gentle giant with a wild side. The son of two SARAS (Search and Rescue Association of Solace) volunteers, he has always been skilled at getting others out of dangerous situations that are common in the Outlands. However, he only began to understand the value of protecting others when he and his boyfriend stole his father’s motorcycle, took it on a joyride, and got trapped by a deadly mudslide. His parents saved them, and his father lost an arm in the process. Gibraltar has never forgotten that sacrifice and has devoted his life to helping those in need.

Ajay Che, aka Lifeline, isn’t someone you would expect to find in the Apex Games. Once the child of wealthy war profiteers, she left home when she learned of the damage her family had caused and enlisted in the Frontier Corps, a humanitarian organization that aids Frontier communities in need. She’s since devoted her life to helping others and joined the Apex Games to fund the Frontier Corps with her winnings.

Learn more about this class with our Lifeline Guide!

Mirage is the kind of guy who likes to stand out. The youngest of four brothers, he perfected the art of fooling around to get attention. The one thing he took seriously was Holo-Pilot technology: introduced to the illusion-creating tech by his engineer mother, he poured over the mechanisms and learned all he could about them. Even when his brothers went MIA during the Frontier War, Mirage and his mother continued to develop holo devices, and the work brought them closer.

Pathfinder is the picture of optimism, despite his circumstances. A MRVN (Mobile Robotic Versatile eNtity) modified to specialize in location scouting and surveying, he booted up decades ago in an abandoned laboratory with no idea who created him or why. With only his MRVN designation to hint at his identity, Pathfinder set off in search of his creator.

Wraith is a whirlwind fighter, able to execute swift and deadly attacks and manipulate spacetime by opening rifts in the fabric of reality — but she has no idea how she got that way. Years ago, she woke up in an IMC Detention Facility for the Mentally Ill with no memory of her life before. She also began hearing a distant voice whispering in her mind that would keep her awake for days on end. Despite nearly driving her insane, once she started to listen and trust it, the voice helped her harness her newfound power of void manipulation and escape the facility.