Learn all there is to know about the Wraith Legend in Apex Legends with our detailed guide! We've got information on her passive, abilities, ultimate, portal, heirloom, skins, and a bunch of tips and tricks to get you better with this character.

Wraith is a pretty interesting character with her ability to enter an alternate reality and pop up back into reality. She can sense when she's being targeted by an enemy, and her ultimate ability allows for some unique plays by spawning a portal that you can bounce back and forth through. Wraith is a not a simple character to play, and will require a good amount of time before mastering her completely.

“There’s a thin line between life and death. You’ll find me there.”

Wraith is a whirlwind fighter, able to execute swift and deadly attacks and manipulate spacetime by opening rifts in the fabric of reality — but she has no idea how she got that way. Years ago, she woke up in an IMC Detention Facility for the Mentally Ill with no memory of her life before. She also began hearing a distant voice whispering in her mind that would keep her awake for days on end. Despite nearly driving her insane, once she started to listen and trust it, the voice helped her harness her newfound power of void manipulation and escape the facility.

Determined to uncover her true identity, Wraith began a quest to find out more about the experiments. Many of the old research facilities, however, are buried beneath heavily guarded arenas used for the Apex Games. Now Wraith has joined the competition, and with every match she gets closer to the truth.

Wraith is voiced by Shantel VanSanten!

Wraith is currently the only Legend that has an available Heirloom. What is an Heirloom? It is a specific bonus set that is available that has a super rare possibility of appearing in an Apex Pack. Heirloom Sets do not consume a full pack, you get it as a bonus. This set can't be crafted with Crafting Metals, and can only be found in packs. Here's the official information from the Apex Legends FAQ:

Here are the items from the Heirloom Set and how it looks when you open it: 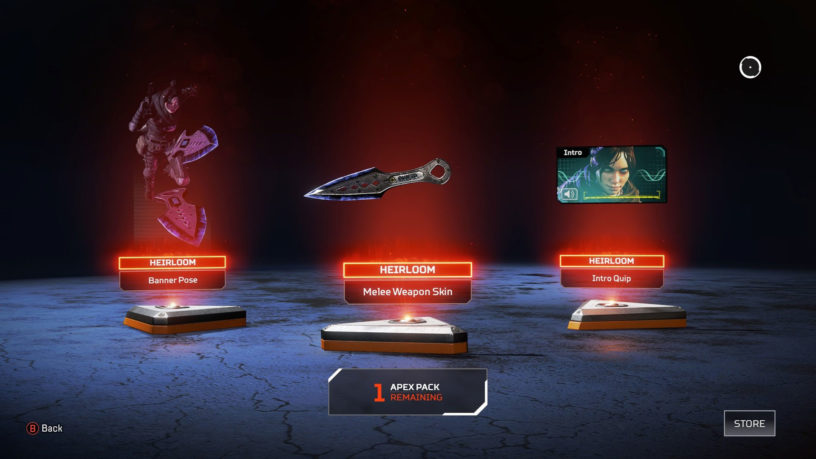 You receive a unique Banner Pose, Melee Weapon Skin, and Intro Quip in the set.

Tactical Ability: Into the Void

Reposition quickly through the safety of void space, avoiding all damage.

This is a solid flanking ability and allows you to escape in certain situations. The problem with this ability is that it's really obvious where you are headed and unless you get cover from a teammate, your enemy can just wait for you to appear and take you out. So, if you are trying to escape, make sure you head towards teammates or be ready to fight the second you come out of the void. You can't fire your weapons while phasing, so be ready once it ends. There's also the issue of not being able to see enemies while phased, so while you might have an idea where they are when you enter the void, they could have easily moved by the time you exit it. Your teammates can help relay to you where they are with pings or verbal communication.

Passive Ability: Voices from the Void

A voice warns you when danger approaches. As far as you can tell, it’s on your side.

Now this is an okay ability, but it's not great. If an enemy is either looking at you or has their sights set on you, then you will get a verbal cue like "you are being looked at" that will alert you. This is not bad when you haven't yet engaged with an enemy, but overall it's not super helpful when you are in the heat of battle and you are already very aware that you are being targeted. It's also pretty good if someone is scoping you with a sniper rifle, and you can then get behind cover quickly. It's also a better ability if you have comms with your teammates, because it's harder to alert them with just the ping system if you are being aimed at.

Link two locations with portals for 60 seconds, allowing your entire team to use them.

The Ultimate Ability is where Wraith really gets interesting. Now, you can absolutely be shot while trying to place these portals, so if you are in the midst of a firefight then it's not that great of an ability. Where this skill is actually good is just prior to a battle. You can either setup a portal on the high ground so you can jump in and out of a battle, or you can flank to the side of your enemy and place the portal so your teammates can jump in it and attack.

This portal can be placed pretty far from where you start, so try to stay behind cover or not in the open as much as possible. The other thing of note to understand is that anyone can take your rift, that obviously includes enemies! This can be good or bad depending on the situation.

Here are some of the awesome skins options available to Wraith!

We've got some wallpapers of Wraith so you can dress up your desktop! They are both 1920x1080 in size, you can click to enlarge them.