Our Archero Heroes Tier List takes a look at the best hero you can lay as in the game! You don't have to play as a random archer anymore, and you can choose between various powerful heroes that have control over the elements. We'll take a look at all of the available heroes and their abilities!

Update (March 12th, 2020): You can get the Shari hero for free! Check out this link for more details.

Our tier list is based on which heroes have the best stats and abilities as they level up.

Meowgik tops our list as the best current hero in the game. It has a powerful skill, which summons an auto-attacking kitty that will take out enemies. These can go through walls, which makes them particularly good at taking out hard to reach monsters. Meowgik also has one of the higher attack stats compared to other heroes, and gets a +5% Dodge bonus at level 40 which is particularly useful.

Sylvan is a new entry to the list and has very high attack and hp stats. The elf prince also has a very powerful skill which features a chance to trigger a random powerful elemental attack. The damage when these trigger is enhanced pretty heavily, so they are even more useful than usual.

Helix features arguably the best skill, which is basically the Rage ability. It increases your attack damage significantly when you are at low HP. He has good stats overall and gets some good bonuses.

Rolla features the highest attack stat and features a pretty strong skill that freezes enemies for a longer period of time. Unfortunately, its bonuses are fairly weak unless you are able to reach level 80 which is particularly difficult.

Urasil is similar to Atreus in that it has particularly weak stats compared to all of the other heroes. His bonuses are fairly weak, and the poison effect bonus is among the weakest skills.

Not surprisingly, but Atreus as the base hero just scales extremely poorly. It has the worst stats in both attack and hp, plus the bonuses it acquires are not particularly strong either. Atreus also doesn't have a bonus skill, so that puts it at the bottom of the barrel.

Here's a look at all of the currently available heroes in the game! Check out this great spreadsheet for more stats and details on these heroes. 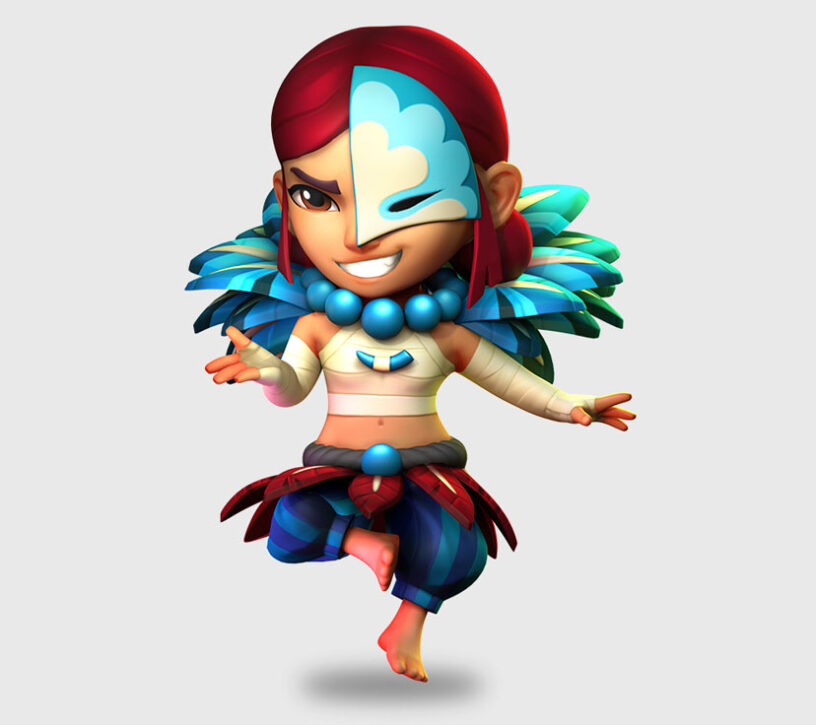 Shari will be obtainable for free by participating in an event that starts on March 12th and extends until April 20th, 2020! We don't have details on the event just yet.

Born of the magical woodlands, she is in touch with nature. 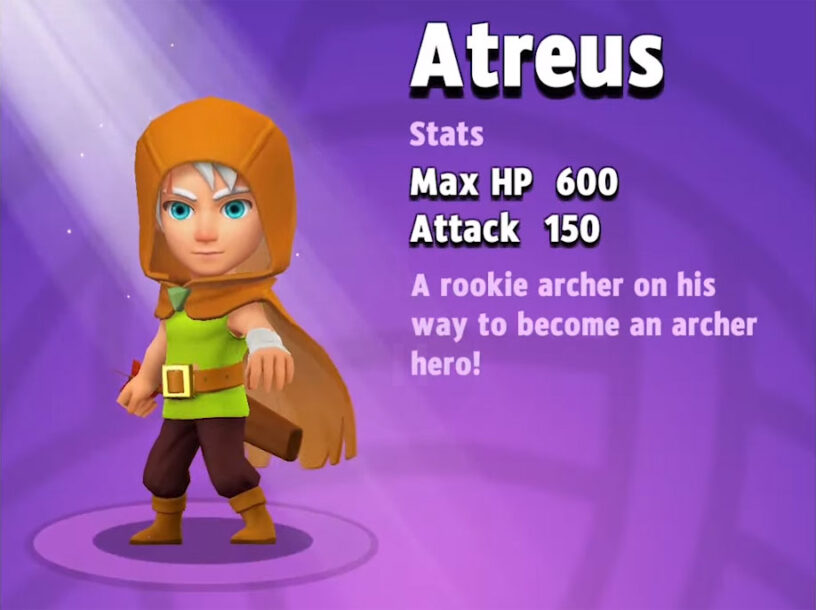 Atreus is the default character that comes with the game and you get them for free. He has the most rounded base stats of any hero. Unfortunately, as you level up your heroes, he becomes one of the weakest due to poor scaling and sub-par bonuses.

A rookie archer on his way to become an archer hero! 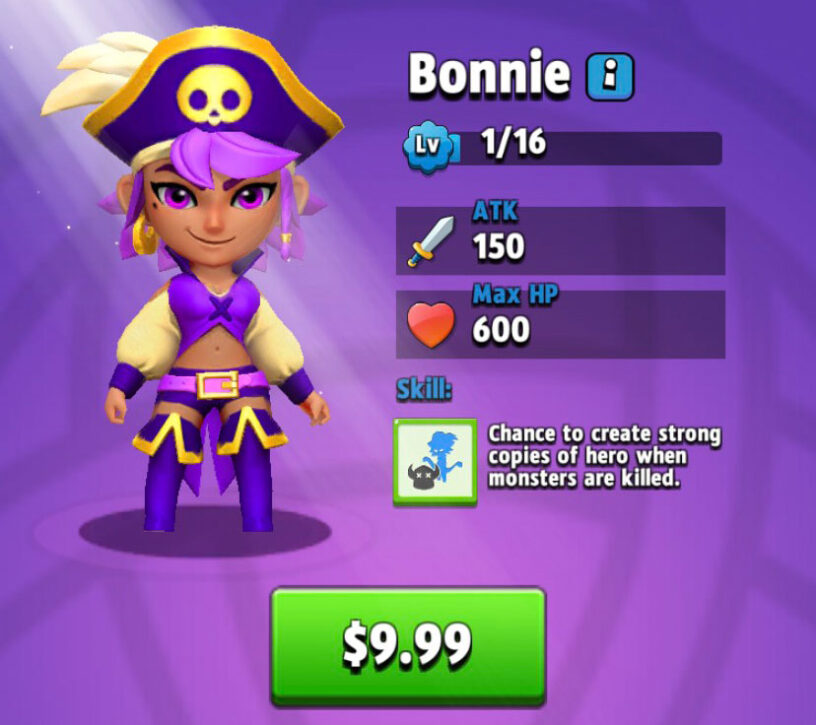 Heroic and kind woman of the sea! She robs the rich and helps the poor. 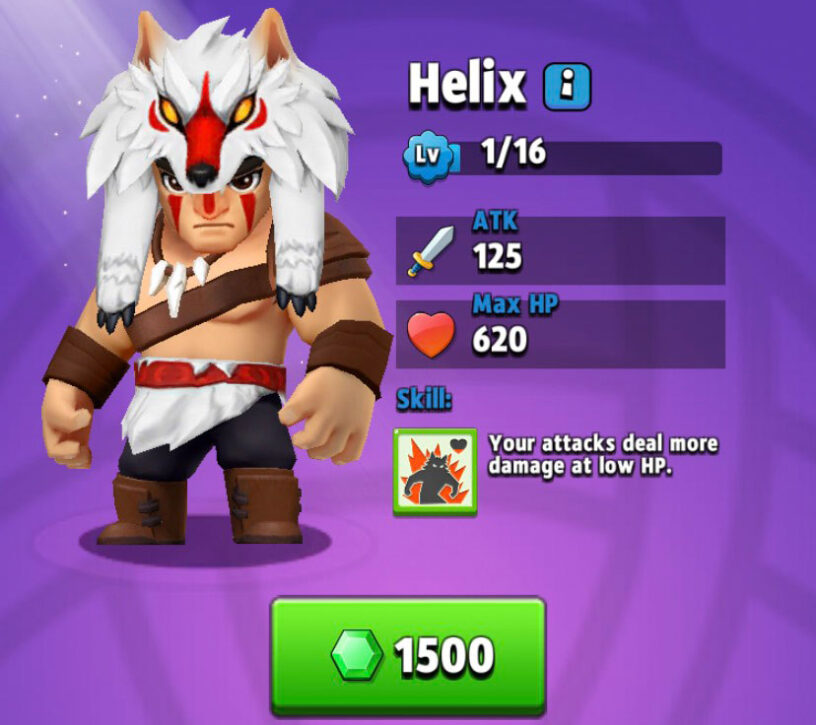 A tribe warrior, a hunter; even the strong admire his power! 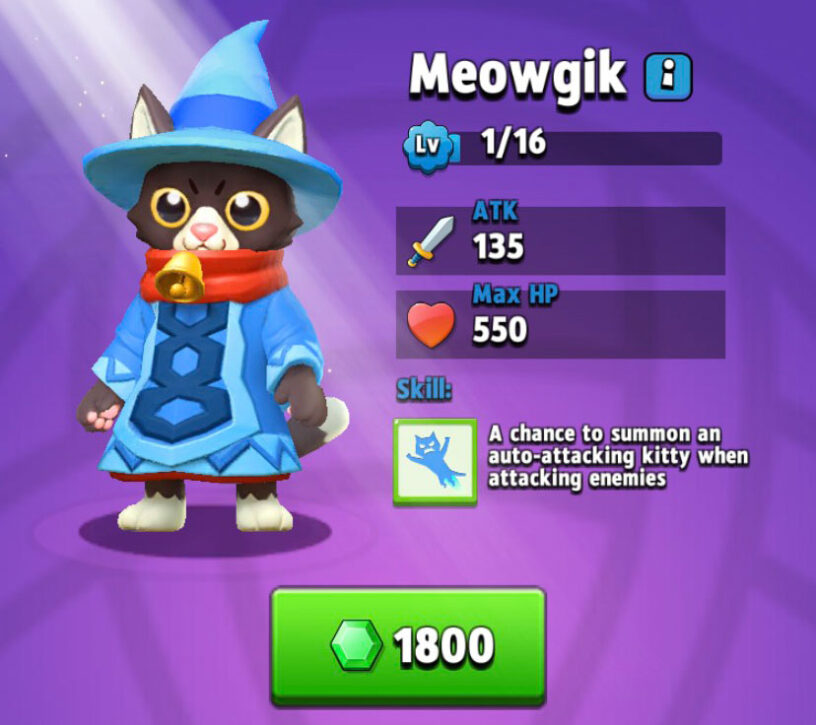 The spirit of the cat combined with magic; not to be underestimated. 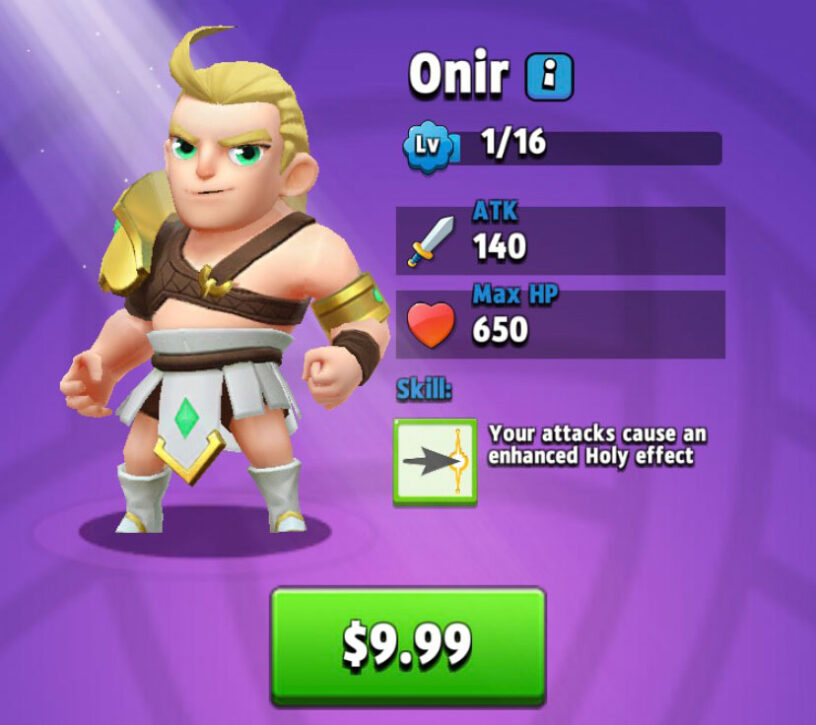 Onir's ability gives his attack a holy splash damage on hit. He has the highest Max HP and actually quite a bit of attack.

The son of Light, possessing all the powers from the Light like his shiny hair. 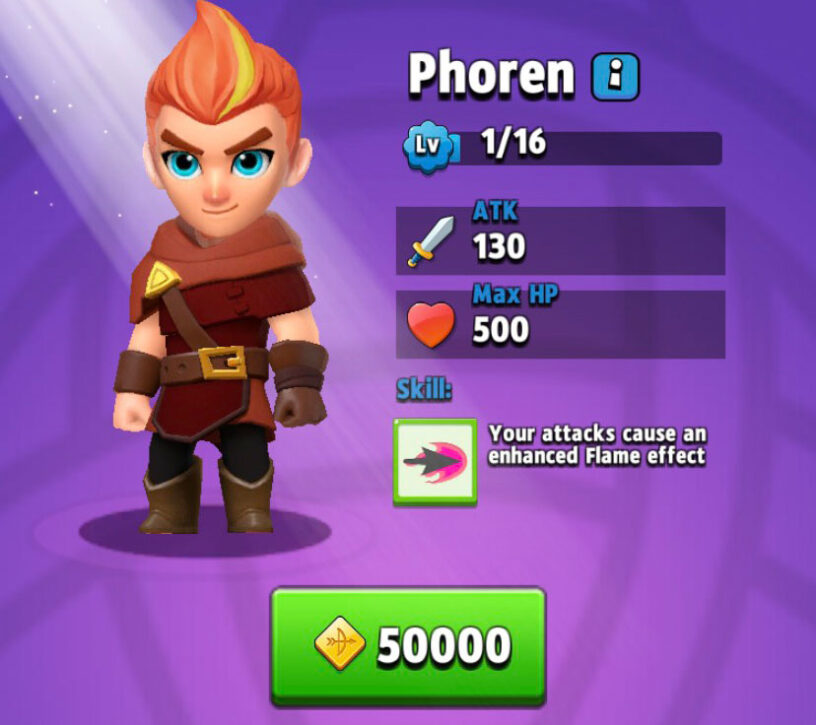 Phoren blasts his enemies with fire on hit and does quite a bit of damage despite having a low attack stat.

Born from Fire, and Fire answers to no one but him. 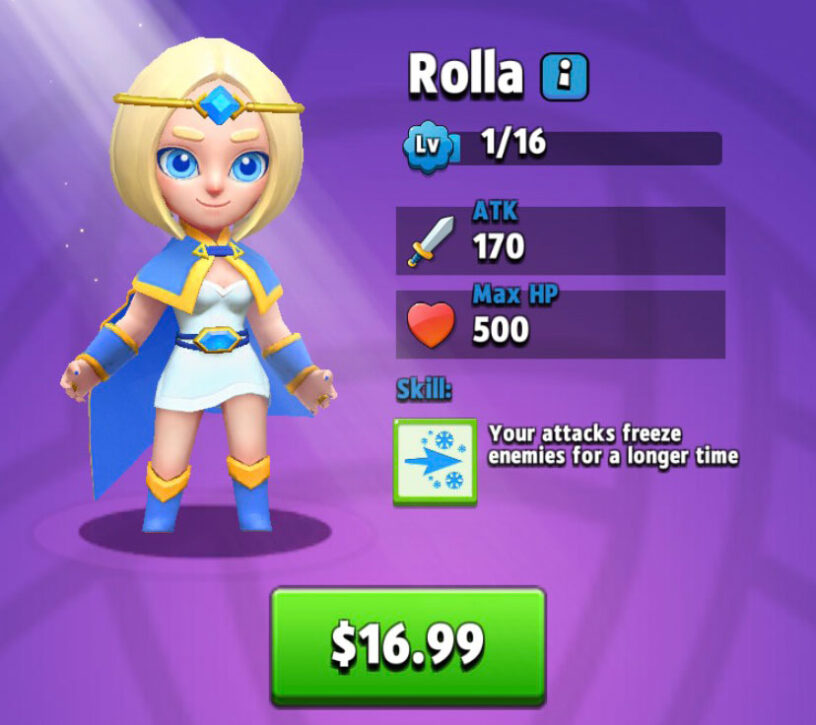 Rolla will briefly freeze an enemy on hit. She has the highest beginning attack stat of any of the heroes, but is also one with one of the lowest Max HP.

The goddess of Ice, wielder of the power of ice and snow with virtuous heart. 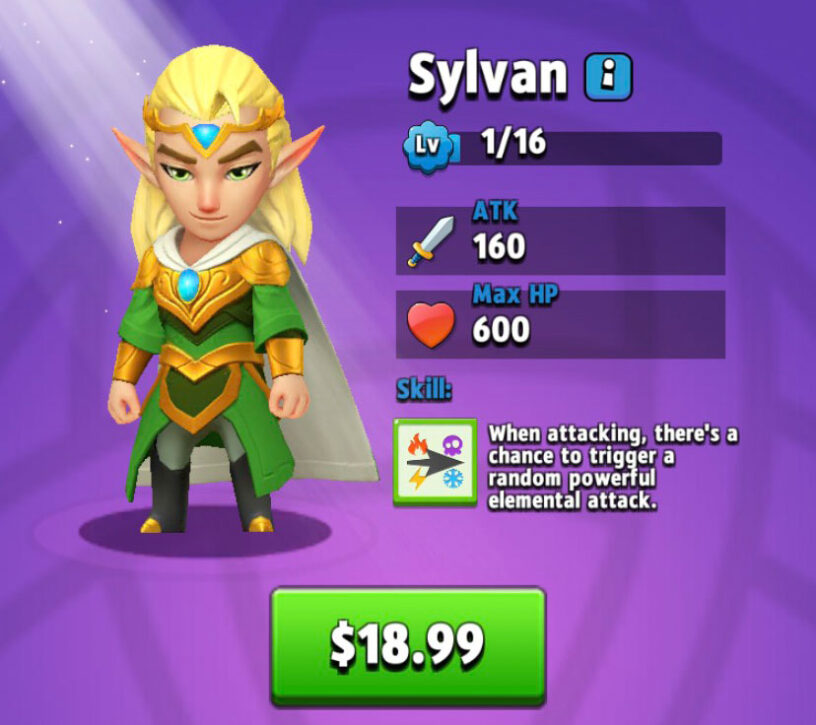 An elf prince, master of the elements and loves nature. 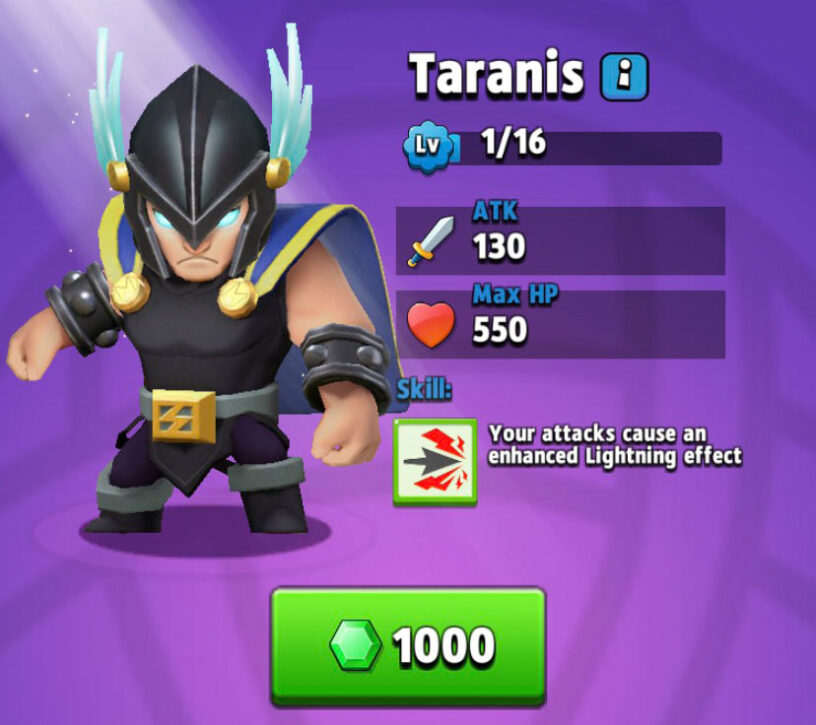 Taranis' attack does lightning damage to any nearby enemies, so if you like good AOE then he might be a good hero for you. He has decent Max HP and his attack is a bit low.

Born of the Thunder, and naturally able to control and wield Thunder. 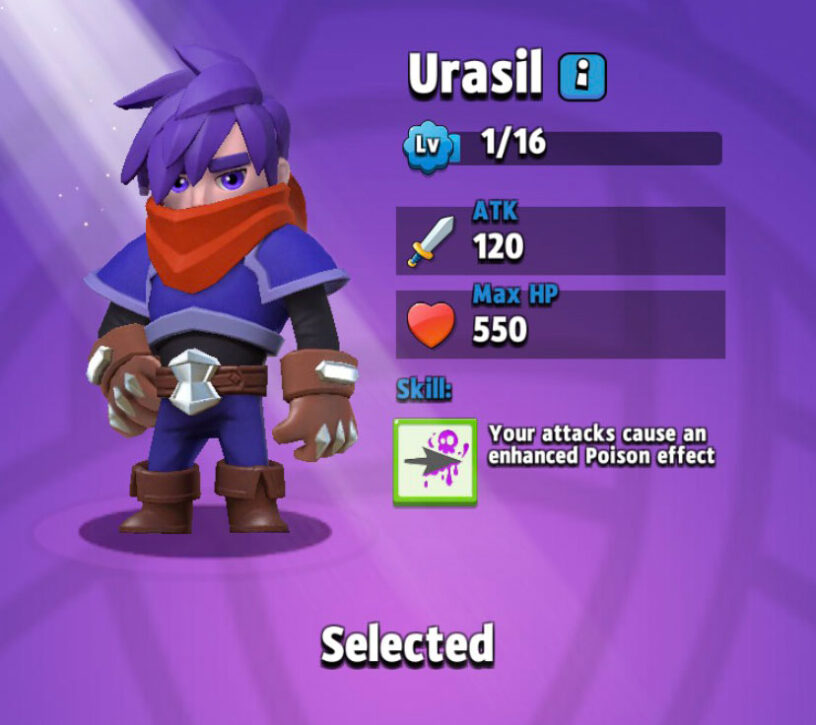 Urasil deals a poison effect to any enemy he hits, which is good against higher health enemies. His HP stat is solid, but his attack is pretty weak. You get Urasil for free once this update is available for you.

Proficient in the study of Medicine, an invisible killer allowing him to be skilled in Poison.

What is Heroic Fightback in Archero?