Our Borderlands 3 Dinklebot Farming Guide walks you through everything you need to know about this rare spawn. You'll be able to kill him over and over again to obtain Loot-O-Grams that can be redeemed at Crazy Earl on Sanctuary for some Legendary guns!

This is a reference to the game Destiny and your Ghost (bot) that you receive in the game that was originally voiced by Peter Dinklage. He is most well-known for his role as Tyrion Lannister on HBO's Game of Thrones.  Players referred to the Ghost as Dinklebot prior to the voice being completely redone in future expansions.

It's unclear what the exact spawn rate actually is but the bot does not show up every time you go to the area. I would say it spawns something like 1 out of 4 times in my experience, but we don't know for sure what the percentage actually is.

Dinklebot can be found on Promethea in Skywell-27. He's not too far from the fast travel point at the beginning of this map. You can't spawn a vehicle here, so you'll need to run all the way over and make sure you trigger the nearby save point that is listed on the map below. Dinklebot is on the corner of what appears to be an empty area. If he's going to spawn, he will come out of the following junk heap. 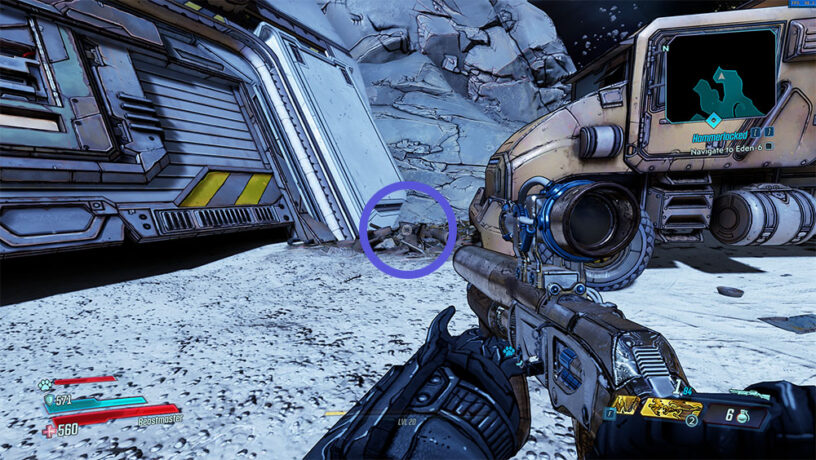 He will not spawn anywhere else, so if you get close to this area and you don't see it float out of the debris then just reset the game and try again. As mentioned previously, it isn't a guaranteed spawn so you can go four or five runs without ever seeing it.

As long as you triggered the save point shown in the map above, you will spawn very close by and can just sprint over avoiding any other enemies on your way. If Dinklebot appears, only focus on it and try to kill it as quickly as possible. It will spawn multiple other little bots to distract you, but don't concern yourself with them. You only care about killing Dinklebot.

Each time you slay the bot it will drop a Loot-O-Gram. You will want to fill your inventory with these before returning to Sanctuary to turn them into Crazy Earl (Eridium Vendor). Turning these in gives you a chance at obtaining one of three of the following legendaries. Keep in mind that it is random chance on whether or not you get one of them, you'll normally just get a common rarity gun for each Loot-O-Gram.

This is a powerful shotgun that was a drop in previous Borderlands games. It has a ridiculous fire rate and it will randomly return ammo to the gun. While it does give you negative Weapon Accuracy, that is largely inconsequential because you will be using this when closer to your enemies. This can also be found as a random world drop.

This is a pretty crazy weapon that pumps out a ton of fire due to its double spinning barrels. If you're able to control the heavy recoil and land critical hits, it will return bullets to your magazine and will ricochet bullets onto the nearest enemy!

If you like old school styled pistols then this is a pretty interesting weapon to have. When you fire this and hit an enemy it sprays out pellets in random directions that bounce off of walls and harm other enemies.