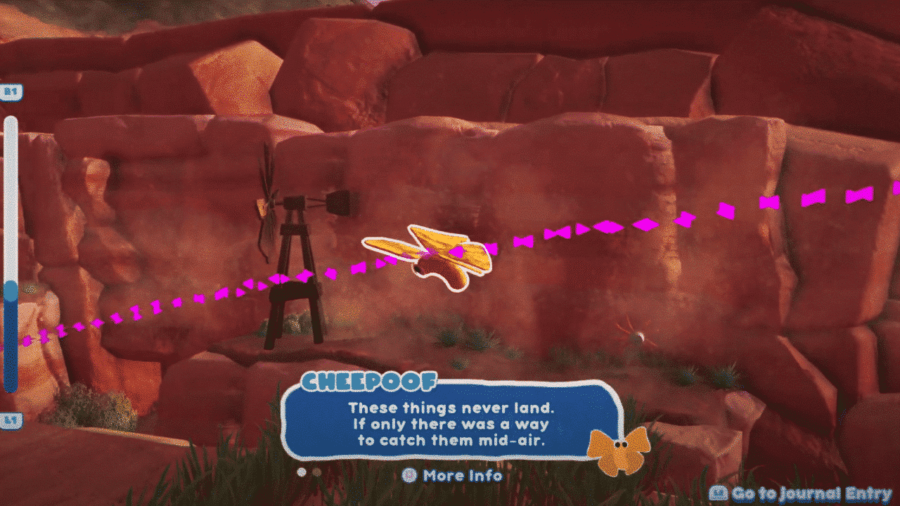 Who would have thought that capturing monstrosities that are also pretty cute be that hard to capture? Of course, some of the creatures in Bugsnax are simple to catch, but others take some thought! Have you been to Snaktooth island yet? Have you managed to survive once it's night? You hungry for some flamin' hot cheese puffs?

Bugsnax how to Catch a Cheepoof

To catch a Cheepoof, you need the Trip Shot and to venture into the Boiling Bay biome, more specifically the lava cave by the coast. Inside the lava cave, you will find the Flamin Cheepoof, scan in to find it's flight path then lay a trap to make it fall out of the sky to be captured!

Before you even begin entering the cave, the most important thing is to make sure that a Paletoss is inside the cave with you. If not, you cannot capture a Cheepoof. Why? Because they are on fire! To do this, get close to a Paletoss, and they will start to chase you, so just let them chase you inside of the lava cave. Though don't let them touch you!

Next, scan the Cheepoof Bugsnax to reveal the flight path, and you'll notice that to be able to set up the Trip Shot, you need to jump onto one of the platforms in the middle of the lava. Be careful not to get yourself put on fire, as this will happen if you touch the lava.

Once you've managed and set up the Trip Shot, fire the other one at an angle, so it crosses the flight path of the Flamin Cheepoof. As long as the wire is close to the area the Cheepoofs is flying; it should work. Now, this is where the Paletoss comes into play.

The Cheepoof will hit the wire, and it'll become stunned and fall. When it hits the ground, the Paletoss will dash over to it and extinguish it. Thus removing its protective fiery coating to allow you to capture it! Dash up to it and press Square, and you now have a Cheepuff!

At this point, you probably already have a Bunger and a Sandopede, so now you can add a Cheepoof to that list! Of course, you can capture Bugsnax in many ways; let us know how you've managed to capture them!