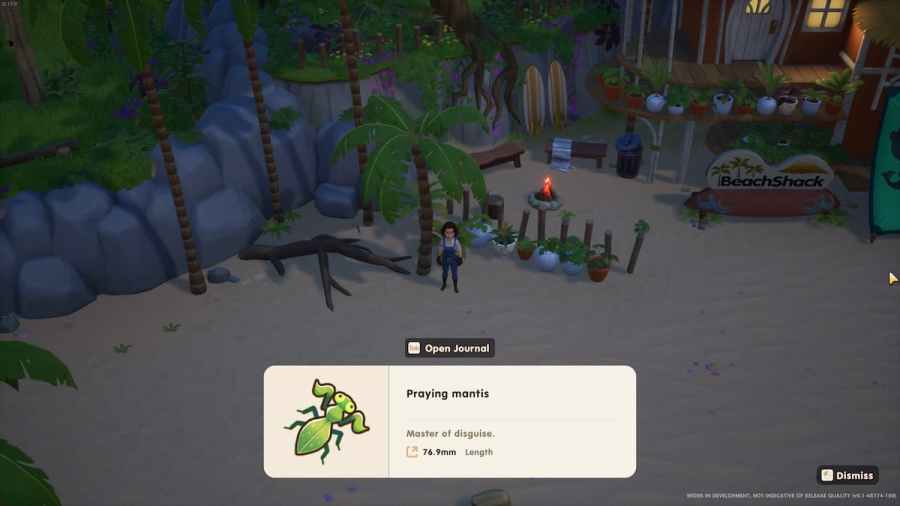 There's a world of insects skittering around Coral Island, and both the Museum and your wallet could benefit from you catching them. Here's how you can net the island's bugs for donations and profit and some tips to aid you in your entomological journey.

Where to find Bugs in Coral Island

Bugs can be found almost anywhere on the island if you know where to look. During the day, investigate areas away from large groups of people. Empty spots around the Cavern and the Beach are typically your best bet.

In the evening, the bugs become bolder and will start to roam around the main roads. This is usually after the villagers begin to turn in for the night. You will still be able to find insects in the empty sections of the field as well.

To catch bugs, you'll need first to complete the quest Visit the Beach Shack. Doing this quest will introduce you to Sunny and Eleanor, the resident bug expert. She will give you a bug net that unlocks the ability to catch bugs. Bug catching is a fun activity that consumes energy, so bring snacks if you think you'll be at it all day.

Coral Island's insects are easily frightened, so you must move carefully if you want to catch them. Once you have your net and have spotted a bug, hold the left mouse button while walking toward the insect. This makes your character creep toward the bug instead of running at them.

If you are approaching a bug and an exclamation mark with a circle next to it appears, stop for a second. Continuing towards the bug when they are aware of your presence will cause the circle to continue to fill. Once the circle has been completed, the bug will startle and skitter away. To prevent this from happening, move slowly and try to judge if you are close enough to reach the insect before the circle completes.

Once you're close to the bug, your nest will cast a v-shaped shadow that demonstrates the area of space it will catch once released. As soon as your target is in that space and highlights, you'll know it's a good time to slap down your net by releasing the left mouse button. This will catch the bug.

How to catch Bugs in Coral Island