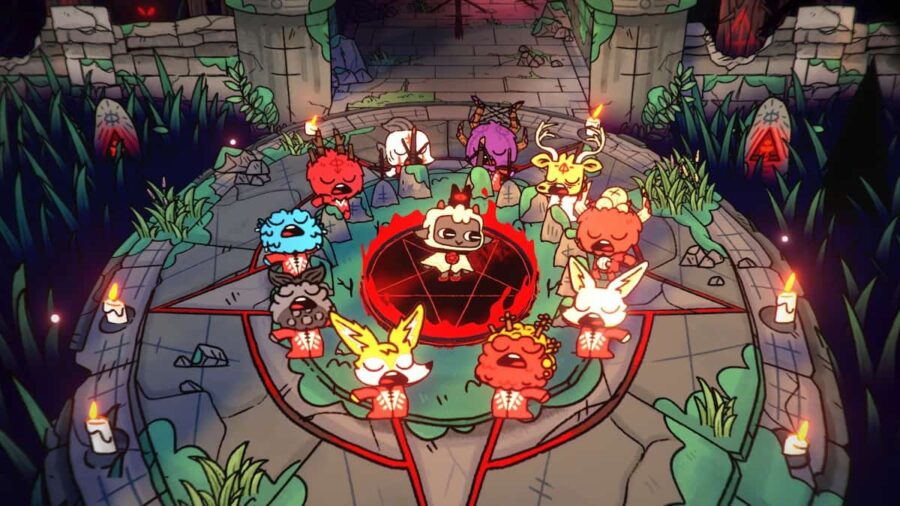 After beating Witness Agares and returning to Darkwood, the One Who Waits gives you the ritual to perform sacrifices in Cult of Lamb. You can gain follower loyalty, manage follower levels, and obtain follower meat through sacrificial rituals. Here's how you can use sacrifices to your advantage.

How to Sacrifice Followers in Cult of the Lamb

Once you have unlocked the ability to sacrifice followers, the actual sacrificing part is pretty straightforward. Simply head to your chapel and select rituals. Once there, you should see an option for the ritual Sacrifice of the Flesh. Unless you have declared a doctrine that changes the number of materials needed for rituals, a sacrifice costs 75 Bones and one follower.

Select the ritual, and your followers will form a circle. Choose the follower (or victim) to be sacrificed, and they will enter the center of the circle, where tentacles will grab them and pull them down to their death beneath the earth. Meat and bones will shoot up from the hole the tentacles left while the surviving followers celebrate.

Related: Should you fix the Lighthouse in Cult of the Lamb?

What do you gain from Sacrifices?

What you gain from sacrifices depends on who exactly you sacrifice. We recommend sacrificing those who ask to be sacrificed and the elderly. Older followers have had a whole lifetime to generate loyalty and are less productive to the commune in terms of work output. The higher the follower's level at the time of sacrifice, the better the rewards.

If you declare the doctrines Belief in Sacrifice and The Good Die Young, you can regularly perform rituals to increase faith and even end up in a position where sacrificing elders results in a +30 to faith. Not to mention, every person sacrificed is a body that doesn't need to be buried or pillaged for meat.

How many people can you sacrifice at once?

There are no group sacrifices in Cult of the Lamb. Only one follower can be sacrificed at a time, and you must wait for the ritual to cool down before you sacrifice another follower. It's helpful to be choosy when deciding who you'll sacrifice, so take the time to pick your followers and level them up as much as possible before performing the ritual.

How to unlock Sacrificing in Cult of the Lamb