Our Destiny 2 Bastion Quest Steps Guide will walk you through everything we currently know about this Exotic Fusion Rifle and how-to start the quest. We've got a full look at all of the quest steps, and feature a list of the perks and weapon features.

The Bastion Exotic was supposed to release January 28th, 2020. However, it looks like the pre-requisite of solving the Exploring the Corridors of Time quest has now been completed. It took days to finish, but now that the solution is out there, you can go ahead and start the steps towards obtaining Bastion! 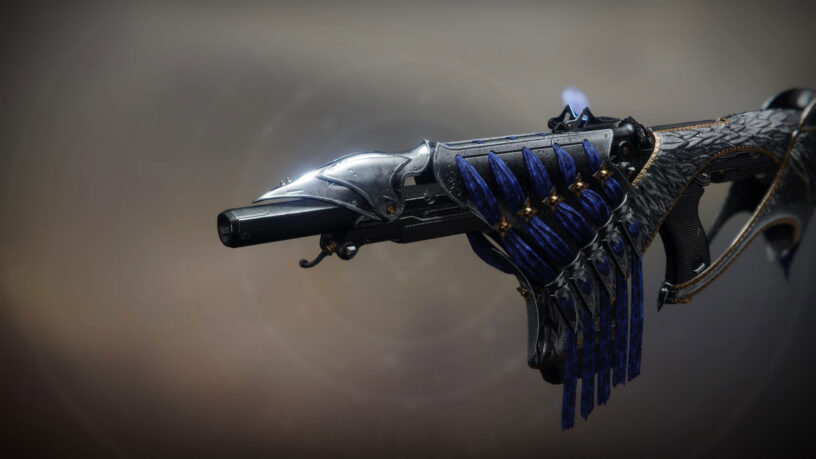 "The final stand is wherever I plant my feet. Not one step more." —Saint-14

It will generate Orbs on multikills and gain a tracker that displays the number of enemies defeated with it. The Masterworked weapon will also receive additional capabilities.

"The final stand is wherever I plant my feet. Not one step more." —Saint-14

You are a bastion of hope for all who are lost in darkness.

Let this consecrated armament offer protection in times of trial,

strength when you feel most alone,

and guidance when there are no roads.

Your Light will shine on to lead our people into peace.

Let this be a symbol of our dedication to their future.

Know that I am proud.
—Father

The epitaph is barely readable, appearing to have been scraped almost clean from the frame. Below the stricken words, five hash-marks are engraved into the weapon. A small etching in Eliksni reads:

Make sure you've completed all of the Saint-14 main story quest lines beforehand, or you won't be able to obtain this quest (it can only be obtained by the character you completed these quests with)! You will need to get the Exploring the Corridors of Time Quest from Osiris on Mercury. Head to the Corridors and you will find symbols labeling each of the corridors. You need to through them in an exact order based on those symbols. Here's a look at the solution (credit to the people of the Raid Secrets Reddit and everyone else who contributed to solving it):

Head over to Saint-14 in The Tower to receive the start to this quest line!

The Light frequency you're chasing aligns with those of not only the Sundial, but also the chronometric core you recovered from the Corridors of Time.

Hunt down Fallen Captains and Servitors anywhere in the Tangled Shore to collect intel to help decipher their comms chatter and find out what they know about this anomaly.

You will need to gather five Fallen intel by defeating Fallen Captains and Servitors. This can be done fairly easily by heading to Thieves' Landing on the Tangled Shore. From that spawn, head north towards the Kingship Dock Lost Sector that is in the middle of the Thieves' Landing area. Before you reach that, to your left there's an opening on the map. Go through that opening and keep running until you encounter the enemies that spawn there. One of these will be a Fallen Captain that you can kill and get intel from. Run out and repeat the process four more times.

The Fallen intel you've collected has allowed you to analyze the Fallen's comms chatter. Two names are repeating: One is Saint-14's, but the other isn't one you've heard before. Perhaps Spider would be able to shed some light on this information.

"Gossip travels fast on the Shore." —The Spider

Time to go speak with The Spider at the Tangled Shore to get the next part of the quest.

Follow Spider's charitable lead to the Lost Sector Empty Tank in Thieves' Landing. Your target has been seen placing Ether bets in back rooms.

"Give the door man my regards." —The Spider

Aksiniks, Bound by Honor can be found in the Empty Tank Lost Sector. That Lost Sector is in Thieves' Landing, you just need to jump out to the fast travel point and then go left and keep along the wall. Take care of Aksiniks, and move on to the next step!

Aksiniks carried a note written in Eliksni script. Ghost has deciphered the text, but you're missing context to find your next move. Perhaps Spider could help.

Time to head back to The Spider to get some more information.

Spider wants you to get your hands dirty. Defeat challenging enemies and complete public events on the Tangled Shore to encourage information leaks. Spider will be in touch.

"I point, you shoot. I like this agreement." —The Spider

This one is more of a busywork step and has you killing 30 "Challenging" enemies (yellow bar enemies), completing 10 Spider bounties, and complete 8 public events. These are all very easy, but represent kind of a time sink to complete. Doing the 10 Spider bounties in particular is going to be somewhat slow, but you should be able to grab 10 of them as long as you have Ghost Fragments to purchase the weekly ones.

Heroic Public Events count for two towards the total, so try to trigger those when possible. Making these Heroic will also add more Challenging enemies to them, so that helps complete that step. I would start doing the Public Events first so you can hopefully complete them both at the same time.

"Apply some pressure, and everything tends to spill out." —The Spider

Head on over to the Lost Sector Trapper's Cave, which is on the Tangled Shored on the right side of the map. You can find the Lost Sector in the center of that area, it should be marked on your map. Run through the cave until you come across a small waterfall. You will find a blue shimmering mist there, that's what you will need to interact with to complete the quest.

Your investigations have aligned. An old weapon belonging to Saint-14 was recovered by a Fallen long ago. That Fallen, buried in the Tangled Shore, has been twisted into a Scorn Chieftain. Saint's Light signal must be coming from his old weapon. Enter strike "The Hollowed Lair, Memento" and track down the new Scorn Chieftain. Relieve them of their stolen armament of Light.

"Dark Ether, eh? Only one place that leads. Happy hunting, friend." —The Spider

Head into the strike, "The Hollowed Lair, Memento" and defeat Reysk, the Waning Light. This is a Tangled Shores strike that you can find at the bottom right of your map. Start completing the strike, but don't finish it all the way. You need to wait for an on-screen message that says that he has appeared. Head to the boss room and take him out.

"Something is troubling me, Guardian." — Saint-14

That's everything! Once you bring it to Saint-14 you will be given the Bastion Fusion Rifle!

Be sure to check out our look at the Best PVE Weapons in Destiny 2!

How to get a sword in Destiny 2