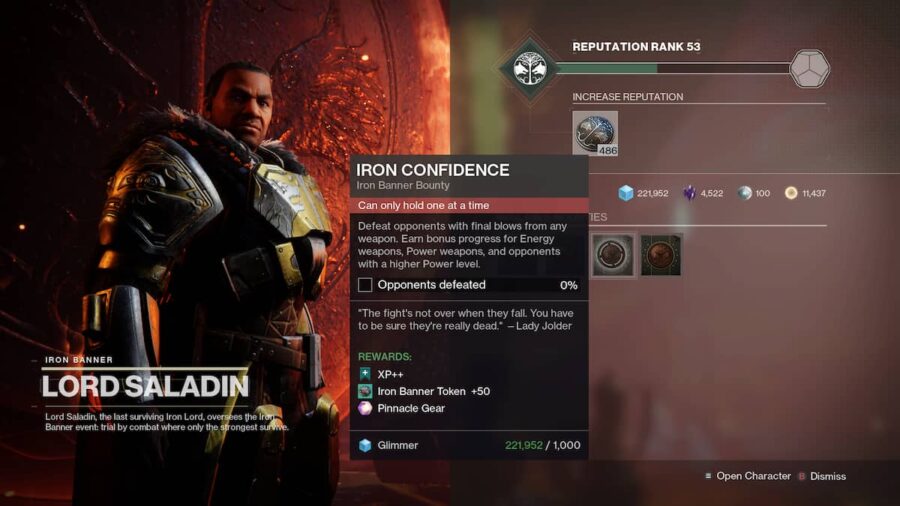 Each week that Iron Banner shows up, four new bounties are up for grabs until the weekly reset when Iron Banner leaves. These bounties are not too complicated but require you to play a decent amount of Iron Banner to complete them all. Once completed, each bounty awards XP, 50 Iron Banner tokens to get event-exclusive gear, and one Pinnacle drop that will help raise your power level.

One of the bounties, Iron Confidence, is one of the more straightforward bounties this week. Basically, all you have to do is just get final blows with any weapon in Iron Banner. Simple enough, right? Well, yes and no. This bounty is simple in writing but tougher in execution. Here is how to complete it faster to get those bounty rewards and avoid Iron Banner burnout.

The nice thing about this bounty is its options. You can earn bonus progress by using an Energy weapon, a Power weapon, or killing someone who is a higher power level than you. But how much extra progress do you get for each? Here is a quick breakdown of the bounty progression.

Related: How to get the new Iron Banner armor in Destiny 2

This last progression bonus is the real interesting one since it stacks on the rest of the kills. It won't be obvious when you kill someone who has a higher Power level than you, but if you check the progress on the bounty, you may see it go up already before you got enough kills with a weapon.

For example, killing someone with an Energy weapon with a higher power level than you counts both the kill and the bonus of the enemy's power advantage. That's one percent. Then, getting one more Energy weapon kill would add another one percent to the bounty progress, making a total of two percent added progress.

It's important to know that if you are already at max power level for the season, then this last bonus won't work for you. This allows lower power level players to finish the bounty faster to help them level up.

So based on the above breakdown, the fastest way to complete the bounty is to probably use a good PvP-centric Energy weapon that can take out enemies quickly. Some solid choices would be Vex Mythoclast, if you have it, maybe a bow like Trinty Ghoul or Le Monarque, or any primary ammo, Energy weapon that works well for you. You could use a shotgun, which is always effective in Crucible, but knows that you only get two rounds per life in a match unless you are continually picking up energy ammo.

And if you use a Power weapon for the one-to-one ratio of progress, make sure to use something that gives you a few extra shots or swings when you pick up the heavy ammo. Any Sword, Machine Gun, or Linear Fusion Rifle will do the trick.

For more information or guides on Destiny 2, check out How to get a guaranteed Reed’s Regret in Destiny 2 on Pro Game Guides!