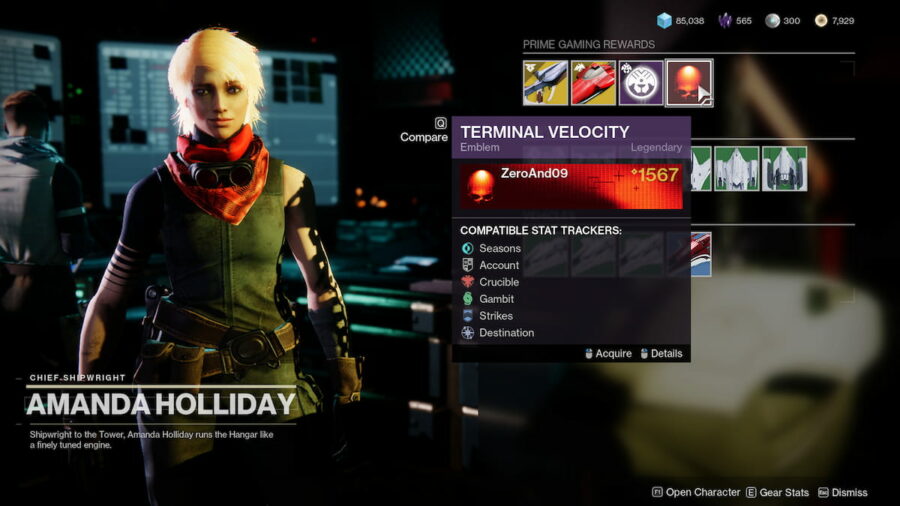 There's a new emblem taking the world of Destiny 2 by storm. This daring red Terminal Velocity emblem prominently features a spooky skull and is sure to stand out on post-game summaries. Here's how to get this coveted emblem.

Where to find the Terminal Velocity Emblem in Destiny 2

The Terminal Velocity emblem is an unlisted reward in the Polaris Lance Exotic Bundle Drop through Prime Gaming. After claiming the reward through Twitch, players will need to speak with Amanda Holliday in the Tower Hangar in-game to collect it.

Related: Where to find Excavation Site XII in Destiny 2?

Everything included in the Polaris Lance Exotic Bundle Drop

Of course, to claim Prime Gaming Rewards, players will need to have Amazon Prime. From there, both their Amazon and Bungie accounts must be linked. No matter the platform Guardians play on, they should be able to claim the bundle.

Is the Polaris Lance Exotic Bundle Drop worth it?

Overall, the Polaris Lance isn't anything to write home about. Its perk, Perfect Fifth, is difficult to reliably trigger. There are other weapons, like Ace of Spades and Sunshot, that execute this effect with each precision shot. The Exotic ornament is nice, but if one isn't going to use the weapon, there's not much point. The Ash Angel Exotic Sparrow looks neat, but again, is kind of middle-of-the-road in terms of appeal. That said, it's worth grabbing if one is missing any of these items from their collection and for the emblem itself.

For more Destiny 2 goodies, check out How to get the Iron Lord title in Destiny 2 on Pro Game Guides.

How to get the Terminal Velocity Emblem in Destiny 2