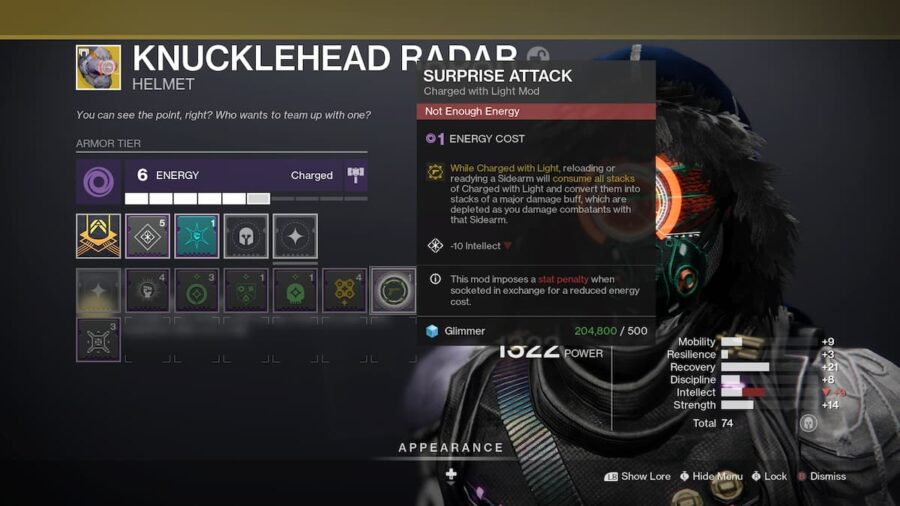 Destiny is nothing without its expansive combat system and huge collection of weapons at the players' disposal. But an important part of said system is the huge list of weapon and armor mods that complement certain perks or strengthen a weapon or piece of armor all together. For new players, this can be a bit of a busy and complex system at first, but as you play, you can quickly become familiar with which mods work best in certain activity situations.

One such mod is called Surprise Attack. It's a very useful combat mod that everyone should pick up at the moment. Here is a quick guide on what the mod does and how to get it.

Surprise Attack is a mod that only affects guardians when they are using a Sidearm. Once you have become charged with light, readying or reloading the sidearm will consume the "Charged with Light" status and convert it into stacks of increased damage. This will, of course, run out as you use the sidearm to kill enemies.

This is a useful mod in PvP activities when using a sidearm since increased damage will give you a leg up in the competition. The only downside to this mod is a penalty to your Intellect stat. It takes away 10 Intellect while the mod is socketed.

How to get this mod

Ada-1 sells the mod in the tower, but she changes her stock of mods every day at 10 am PT / 12 pm CT / 1 pm ET. The mod costs 10 Mod Components to obtain. She will most likely resell this mod if you missed it that day. Here is her location in the tower.

For more awesome Destiny content, check out, How to Complete The Intruder Triumph in Destiny 2 on Pro Game Guides!