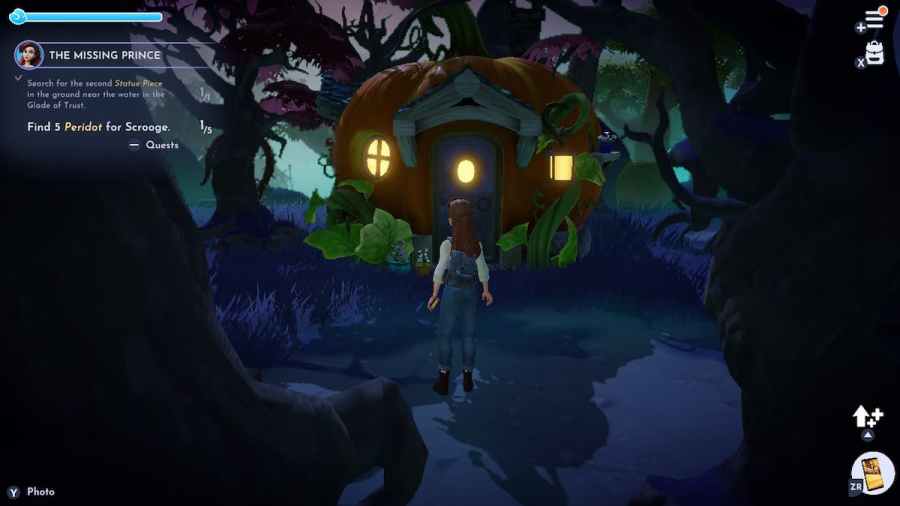 Nestled in the spooky Forgotten Lands, surrounded by balls of green fire, lays a pumpkin house. The windows twinkle in the relative darkness of the biome, and the flowers appear well-tended. But try as you might, this is one house in Dreamlight Valley where no one comes to the door when you knock. Here's everything we know about this mysterious home and its owner.

Which Disney characters could live in the pumpkin house in Forgotten Lands?

None of the characters available in the early access version of Dreamlight Valley live in the Forgotten Lands. That being said, however, some of the characters that are slated for release have been leaked. On that list are both Cinderella and the Fairy Godmother from Cinderella.

Related: Can you make it rain or change weather in Disney Dreamlight Valley?

While Cinderella may be trapped in a pumpkin prison, it seems a bit more likely that the Fairy Godmother is the caretaker of the pumpkin house while Cinderella was swept away back to her realm by the forgetting. If the Fairy Godmother left the valley, her magic should have left with her, which would have transformed the pumpkin from a magical house back into its original shape. Furthermore, the outside of the house is cared for despite no one ever leaving the property, which speaks to a level of magical resourcefulness.

How to enter the pumpkin house in Forgotten Lands

It is currently impossible to enter the pumpkin house in the Forgotten Lands, most likely because the character who resides within its walls is not ready for release just yet. Like the cave in the Sunlit Plateau, whoever lives in the pumpkin house isn't in the game in the current edition. The house's owner may come with the next major update, which Gameloft hopes to drop in mid-October 2022, but that has yet to be confirmed.

Who lives in the Forgotten Lands pumpkin house in Dreamlight Valley?