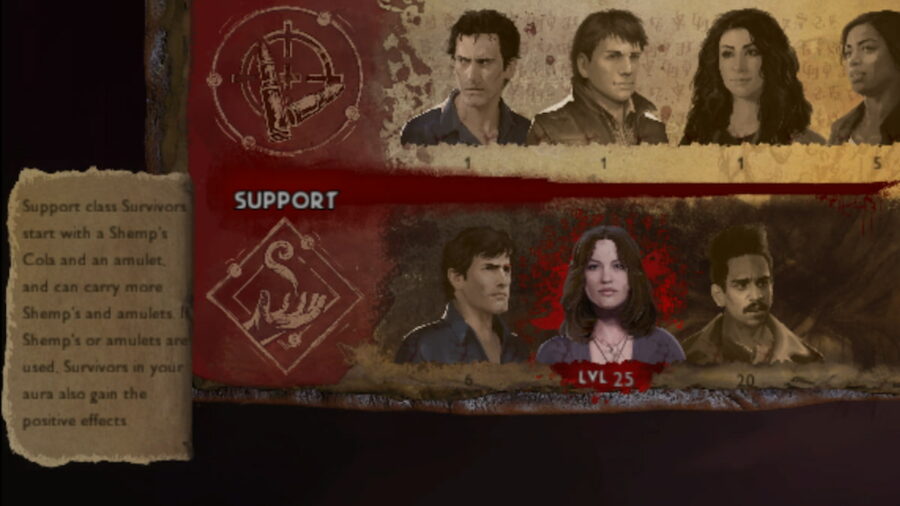 There are three Support characters in Evil Dead: The Game with four unique Skills. They all have the same Skills they can allocate their points toward to either buff themselves or provide more ways of helping their fellow Survivors. It's an important role to have on any team and can make the difference between Victory and Defeat. This is how to play Support in Evil Dead: The Game.

Each Support Survivor starts off with a Shemp's Cola and an Amulet. When in range of other Survivors, using either of these items will have their effects gained by anyone in that character's aura. Hoarding Shemp's Colas and Amulets or even requesting that the other Survivors give these items to the Support is very important for this reason. Even if the Support character's Health or Shields are full, they can still consume Cola or use an Amulet to heal or provide Shields to their teammates.

Each Support Survivor has the same Skill Tree that divides into three sections. The first Skill increases the healing effects of Shemp's Cola and the other Skills at the top all increase the Support character's abilities in combat. In the middle are Skills that have to do with Shields, Fear, and the Objective. At the bottom are Skills that help the Support character heal, carry more Shemp's Cola, and revive other Survivors more effectively.

Warrior, Hunter, and Leader characters are much more suited for combat in the game, but Support players can still put in a good amount of damage. Spending Skill Points on increasing damage isn't always a waste. However, it is more advisable to put Skill Points into Skills like First Aid or Reinforced Amulet. Stocking up on consumables is the best way to help the team, and players should try to stick close to as many teammates as possible. This not only ensures that the Support player is protected, but it makes sure the player is close to the other Survivors so they can be healed quickly before getting downed.

How to play Support in Evil Dead: The Game