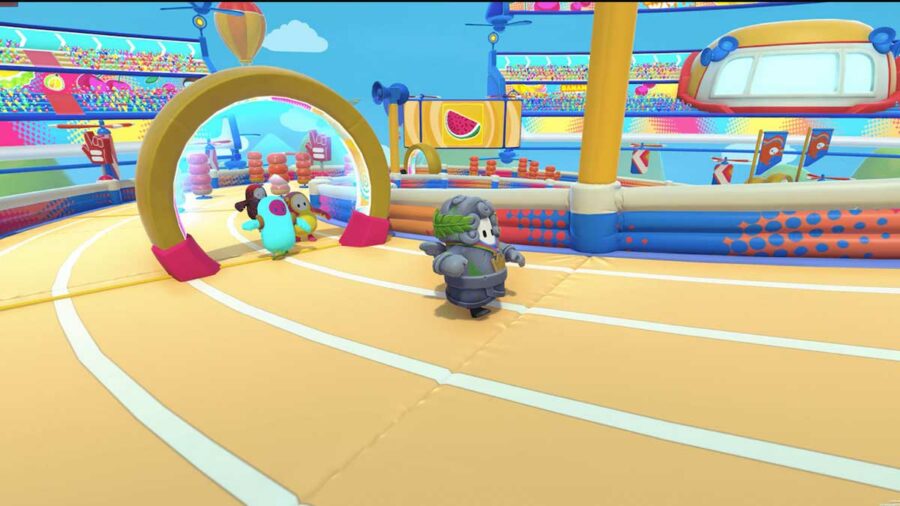 Alongside its transition into a free-to-play game, Fall Guys: Ultimate Knockout has recently received a complete reboot. Season 1 for Fall Guys Free for All features 7 new rounds that players can experience at launch. Here's a guide to how the new rounds and obstacles work and the best strategies to win them.

The concept of 1v1 Volleyfall is pretty simple: you have to knock the ball into the opponent's court. If your opponent fails to hit the ball back at you and the ball touches their court floor, you gain points. The player with the most points at the end of the round wins.

In Speed Circuit, players race three laps around a course that is filled with several obstacles. As you have to complete three laps on the same circuit, you should try and memorize the obstacles in the first lap so that you know how to tackle them in the next laps. Also, try and pass through every loop on the course for a speed boost.

Track Attack is an iconic game that tests players' speed and agility. Your objective here is to race to the finish line through various obstacles such as speed arches, jump ropes, and bouncy floors. While bouncy floors can slow you down if your impact angle is incorrect, make sure to utilize the speed boost loops on the elevated ground to gain an edge over your opponents.

As the name implies, in the Bounce Party round of Fall Guys, you have to bounce through hoops that are thrown at you to score points. To make things easier and more fun, the floor is made even bouncier so that players don't have much trouble threading the needle. Once you successfully pass the specified number of hoops, you are qualified.

In this revolving circuit round, your goal is to stay away from the fan in the center and avoid obstacles that the game throws at you. The Swiveller puts your reaction and timing to the test. All you have to do is dodge the incoming obstacles by correctly timing your jumps and surviving until the other players are eliminated.

After being spawned on a platform, parts of which are collapsing over time, your objective is to grab and throw the Blast Balls to knock other players out of the platform. In this round, you have to keep away from two obstacles: opponents' incoming Blast Balls and the falling platform parts.

While the falling platform part gives you a hint as it vibrates before falling, beware of the Blast Balls as they can be thrown at you out of nowhere. Also keep in mind that holding the Blast Balls for too long can cause them to explode in your hands, which can throw you off the floor.

Stay tuned to Pro Game Guides for more Call of Duty and Warzone content. In the meantime, head over to our article on How to transfer progress in Fall Guys using Cross-Progression.